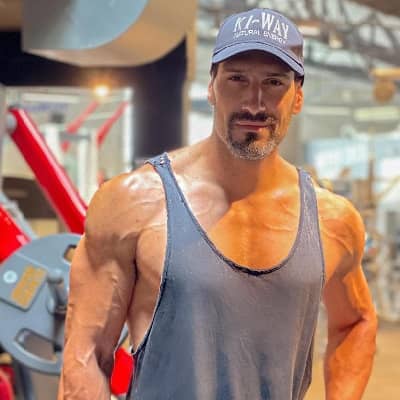 Talking about his relationship details, Marko Zaror is possibly single and he is not dating anyone at the moment. He seems to be focused on his career and professional life.

Previously, Marko has dated actress Celine Reymond. Reymond is a well-named Chilean actress and singer. They were together for a while but separated in 2010. Other than that, he has been secretive towards his relationship details and affairs news.

Who is Marko Zaror?

Marko Zaror is a well-recognized Chilean martial artist and actor.

Zaror is widely famed for his roles like Machete Kills(2013) and performed stunts in movies like The Rundown (2003).

Moreover, he holds black belts in judo and aikido as well as a green belt in Shotokan.

Marko Zaror was born on 10 June 1978. At present, he is 43 years young star. Likewise, his birthplace is Santiago, Chile.

Marko is the son of his father, Fernando Zaror whereas his mother is Guna Aguad. Moreover, he has not mentioned his sibling’s information in the public yet.

Talking about his nationality, Zaror holds a Chilean identity whereas his ethnicity is Chilean.

Regarding education, the actor began training in martial arts when he was six years old.

By the age of 18, Zaror had become an expert martial artist. He also studied at Colegio Craighouse S.A.

Marko started his career as a young boy with a passion for martial arts and fighting, inspired by Bruce Lee, Jackie Chan, and Jean Claude Van Damme. He later moved to Mexico and found success in modeling by doing fashion shows. Also, he starred in Spanish language action films which consist of Hard as Nails and Into the Flames.

Moreover, Zaror performed his big role in 2003 where he featured as a stuntman and martial arts double for Dwayne Johnson. In 2010, the stars performed in the film, Undisputed III: Redemption which became his first American film. Also, he spoke English for the first time in the movie as he was before a stunt man.

In 2013, the star performed in Machete Kills where he worked as an associate of the main villain Luther Coz with “Zaror” being his character’s name. In 2010, Marko worked as a Colombian prisoner/fighter in the movie, Undisputed 3.

Freshly, the star is working on the highly anticipated Violent Rider with writer Ernesto Diaz Espinoza.

A famed Chilean actor, Zaror has earned a handsome amount of money from his profession. He has been active in his profession from the year 1998 till the present.

It is reported that Marko Zaror has an estimated net worth of $1 million.

However, the stunt performer has not disclosed his exact salary, earnings, and assets details till now.

Marko has never been part of any controversial matter or rumors till now. The stunt man has been preoccupied with his professional and private life.

It seems that Zaror prefers enjoying his personal life and does not want to merge it with his professional life.

43 years young, Zaror has handsome looks and an admirable personality. He stands at a height of 6feet 2inches. Also, he has a balanced body weight of 80 kg.

Furthermore, Zaror has dark brown eyes whereas his hair is black. His body measurement is 42-35-16 inches(chest-waist-hip) respectively.

Regarding his social media presence, Marko Zaror is an active personality on social media. Marko has more than 103k followers on his official Instagram account @markozaror.

He is also active on Twitter with around 30.6k followers.

Moreover, Zaror is also available on Facebook with nearly 26.1k fans and supporters.