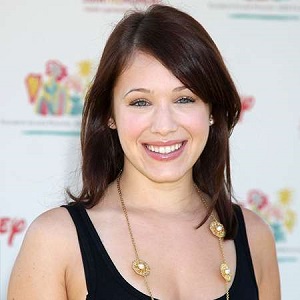 “An agent saw one of the plays I did at ACT, but my mom was like, No, she's too young. I became so annoying that a year and a half later she just couldn't stand hearing me any more!”

How long Marla Sokoloff has been dating Alec before marrying?

Marla Sokoloff is a married woman. She has been married to Deadsy drummer, Alec Puro. They began dating in 2004 and after being in a relationship for 4 years, they got engaged in October 2008 and got married on November 7, 2009.

The couple welcomed their first daughter, Elliotte Anne in 2012 and their second daughter, Olive Mae in 2015.

Previously, she was in a relationship with her co-star James Franco for five years. They met for the first time on the set of ‘Whatever It Takes’ in 1999. She is currently residing with her family and her dog, Coco in L.A.

Who is Marla Sokoloff?

Marla Sokoloff is an American actress who is best known for her role as Lucy Hatcher on the ABC sitcom ‘Fullhouse’.

She is also well recognized for her performance as Gia Mahan on ‘Fuller House’.

She was born on December 19, 1980, in San Franciso, California, USA. She was born on the same date as Jake Gyllenhall. Her birth name is Marla Lynne Sokoloff and she is currently 42 years old.

Her father’s name is Howard Sokoloff(podiatrist) and her mother’s name is Cindi Sokoloff(former caterer). Marla’s family is Jewish and they are originally from Russia and Germany.

She has got an older brother named Jared Sokoloff and who are a photographer, chef, and director. Marla was interested in music since her early childhood and she got inspired to get in by her father. She moved to L.A. in 1994 and continued her education.

Her hobby is writing music and collecting guitars. She belongs of German Jewish and Russian Jewish descent. Marla holds American citizenship and her ethnicity is Ashkenazi-Jewish.

She attended Los Angeles High School for the Arts and graduated from there.

Marla debuted her acting career in 1993, at the age of 12. She portrayed the role of Gia Mahan in ‘Full House’. Marla was cast as a series regular in the series ‘Over the Top’ as Gwen Martin. She appeared in that series in eleven episodes.

The actress got her breakthrough from the legal drama ‘The Practice’ in which she portrayed the role of a sassy receptionist, Lucy Hatcher from 1998 to 2004.

In the meantime, she acted as a guest actor in series like ‘Strange Frequencies’ in 2001 and ‘Night Vision’ in 2001.

She made her notable performance in the popular series ‘CSY: NY’ as a guest character Abigail West in 2011 and later starred as Dr. Chelsea Mullins in ‘Melissa & Joey’.

Also, she portrayed the recurring role of Gia Mahan in the Netflix original ‘Fuller House’ from 2016 to 2018.

She got nominations for Screen Actors Guild Awards in the category Outstanding Performance by an Ensemble in a Drama Series for ‘The Practice’ in 2001, 2000, and 1999.

She has an estimated net worth of around $500,000 as per 2022’s data, and it is expected to rise in the future as she is still active in her career.

The talented actress has been successful in maintaining her celebrity status and she has not harmed anyone in her career to date.

So, Marla has not been involved in any types of rumors and controversies.

Her body measurement is 36-26-36 inches. Also, Marla has got blue eyes and light red hair.

Is Ariana Madix ready to have children – freezing her eggs?