Who is Marlena Stell Dating?

Marlena Stell is currently dating, Anuradha De Silva since 2018. Together, they are parents to a daughter named, Adelina De Silva, who was born in May 2020.

She went through a miscarriage in 2021 in Texas.

Who was Marlena Stellpreviously married to?

Nick Reichert:- Previously, the Youtuber was married to Nick. They took the relationship forward via marriage soon after their college graduation. Unfortunately, the marriage could not last long.

Ashanti Williams:- After separating from Nick, she was married to Ashanti. Also, this marriage could not last long and they officially divorced in January 2018. 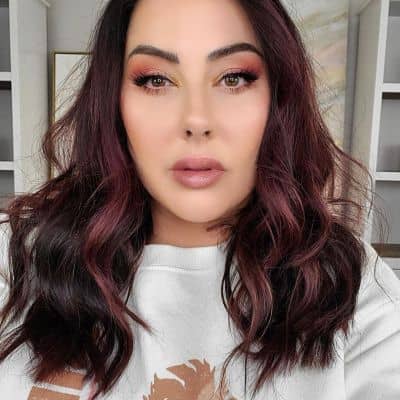 Who is Marlena Stell?

Marlena Stell is an American Youtuber, Social media star, and Entrepreneur. She is the founder and CEO of Makeup Geek, which is a cosmetic company.

Similarly, she has a popular YouTube and Tik Tok channel where she uploads her makeup tutorial videos and video on beauty issues.

Currently, While interviewing with CNN, she revealed how she was denied Miscarriage treatment due to the Texas abortion ban. Her following revelation has stolen the attention of many viewers.

The beautiful artist was born on December 27, 1979, in the state of California. As of 2022, Marlena Stell is 43 years old holding an American nationality. Her ethnicity is not known at the moment.

The details regarding her parents, siblings, and educational life is also unknown to the media.

She started her career at a high school based in Michigan as a music teacher. She started a YouTube channel named, Makeup Geek in 2008. She uploaded the videos related to makeup issues while she was still teaching.

But, as of 2022, she has changed her channel name to Marlena Stell.

She soared to fame after the launch of the Makeup Geek. Then, she quit teaching and went to launch her product line on a website named, MakeupGeek.com. She also launched her apparel business, Marsté Fashion.

The net worth of Marlena Stell is estimated to be around $100 thousand. Her salary and earnings her not known at the moment.

Recently in July 2022, While interviewing with CNN, she shared her life news, how she was forced to carry a dead Fetus for 2 weeks after marriage because of the Texas Abortion Ban.

She shared she was very happy to know about her pregnancy along with her husband. The baby was normal until the ultrasound was done in 7 weeks. The couple wanted to have a little brother or sister for their first child, daughter, Adelina.

Unfortunately, she went through a pregnancy loss after another two weeks of ultrasound. This was so devastating for them.

After then, she asked her doctor for a dilation and curettage procedure (D&C). It is a surgery to take out the dead fetus and abort the living fetus to avoid infection or long-term health issues for the mother.

But the doctor denied the surgery because of a Texas anti-abortion law.

Texas Supreme Court has overturned a woman’s constitutional right to an abortion. So, this is also affecting other pregnancy-related issues like Contraception, fertility treatments, and miscarriage.

So, now they’re contemplating moving away from Texas, away from their extended family, just so they can try to get pregnant again.

The Youtuber stands at a good height with average weight. Similarly, she has a charismatic personality.

Marlena Stell has a fair complexion along with a pair of brown eyes and purple hair. However, she keeps dyeing her hair.

Moreover, her self-titled Youtube channel has garnered over 1.47million subscribers. On the other hand, she is also active on Tiktok, having around 5.2K followers.

Meet Marlena Stell, the Woman Who was Forced to Carry a Dead Fetus After Miscarriage for 2 Weeks!