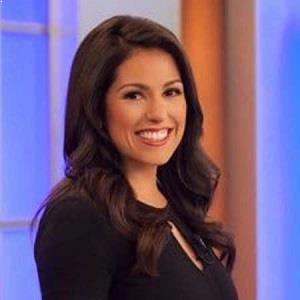 I have worked as both a print reporter and a digital journalist and videographer, covering everything from traffic to fashion to missing children to cattle futures - and I'm willing to take on anything in between. I love a good challenge and learning new things.

Marley Kayden is married. Currently, she lives in River North with her husband, a child, and their rescue dog, Chance. There is no further information regarding the marriage date and the wedding ceremony.

Marley was pregnant and has posted several pictures relating to her pregnancy on her Facebook page.

Who is Marley Kayden?

Marley Kayden is an American journalist and a musical theater actress. Currently, she is a Weekend Traffic Anchor at NBC 5, which airs on WMAQ-TV.

Furthermore, she is a CBOETV correspondent and the host of ‘Most Actives with Marley Kayden’.

There is no information regarding the birth date of Marley. But she was born in Chicago, Illinois, USA, and has Caucasian ethnicity.

In addition, information regarding her early life and childhood is also not available at the moment.

Talking about her education, Marley holds a Master of Science in Journalism with concentrations in Economic Reporting and Broadcast from Northwestern University’s Medill School of Journalism and a Bachelor of Arts in Music from the University of Virginia.

Furthermore, she is also a member of the Kappa Tau Alpha National Journalism Honor Society. In addition, she scored a 3.95 GPA which was the highest in her class. She became a Medill Ambassador and was a recipient of Medill Alumni and Medill/NU Scholarships.

Initially, Marley Kayden spent more than half of her life working as a professional musical theatre actor in New York. Next, she worked as a fill-in traffic reporter for WGN/CLTV. She started her broadcast career covering commodities from Bloomberg News’ Chicago bureau.

Marley joined the NBC 5 News team as the Weekend Traffic Anchor in August 2014. She currently anchors and writes her own weekday daily show, ‘Most Actives with Marley Kayden’. Furthermore, she has worked as both a print reporter and a digital journalist and videographer. She has spent her life informing and entertaining, first from stages across the country and then on screen and in print.

In addition, she filmed, edited, and produced a documentary ‘The 100th Day: Unknown Territory’ which won the Award for Excellence in the Long Form category at the NATAS Chicago/Midwest Emmy Awards.

As a result of her successful career as a TV star, she had amassed a lot of fortune and fame. However, not much attention was given to her salary. She had an estimated net worth of $500 thousand.

Marley has successfully kept her personal life away from the spotlight. Currently, there are no rumors concerning her. Furthermore, she has lived a controversy-free career as of now.

Talking about her body measurement, Marley Kayden has a height of 5 Feet 8 Inches and average weight Her hair color is black and her eye color is dark black.