Marlo Thomas is an actress and producer who is renowned as Ann Marie of That Girl and Gran of LOL. She exchanged vows with a media personality, Phil Donahue.

Marlo Thomas is a married woman. She exchanged vows with a media personality, Phil Donahue. The wedding took place on the 21st of May 1980. They started dating since 1977 when she appeared in the TV show, Donahue as a guest.

Currently, on the 21st of May 2020, the couple will be celebrating their 40 years of married life.

Prior to that, she was in a long-term relationship with the playwright and screenwriter, Herb Gardner.

Her husband, Phil was previously married to Margaret Cooney. With her, he has five children including four sons, Michael, Kevin, Jim, and Daniel, and a daughter, Mary.

With her step-children, she shares a friendly relationship. 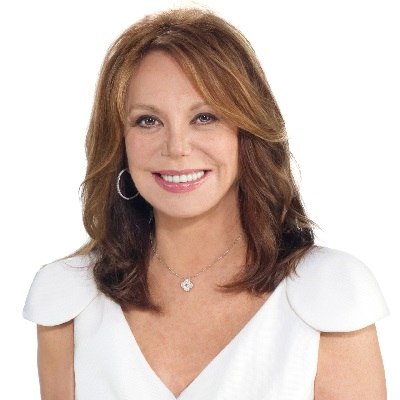 from the very first day, I decided that I was not going to try to be a 'mother' to Phil's children in the traditional sense — they already had a mom — but, instead, to be their friend. I'm proud to say that the friendships I established with them are as strong today as they were 30 years ago — even stronger.

Who is Marlo Thomas?

Marlo Thomas is a Golden Globe Award-winning actress and producer. She is renowned as Ann Marie of That Girl and Gran of LOL.

Last, in 2018, she appeared in Ocean’s Eight as Rene. Recently, in 2020, she launched her latest book, What Makes a Marriage Last.

Marlo Thomas was born on the 21st of November 1937 in Detroit, Michigan, the U.S. Her birth name is Margaret Julia Thomas.

She is the eldest among two siblings including a sister, Terre, and brother, Tony Thomas. Tony is a producer by profession.

Marlo Thomas started her acting career through Television. In 1960, she debuted on TV with the series, The Many Loves of Dobie Gillis in minor roles.

Moving forwards, she started making her appearance in the TV series including Thriller, Insight, and My Favorite Martian in some minor roles.

However, she first came into the spotlight when she appeared on the TV sitcom, That Girls. In the series, she portrayed the lead character of Ann Marie. Altogether, she featured in 137 episodes.

Besides that series, she is also famous for her movie appearances too. Some of her movies along with the year and character name are-

As a producer, she first debuted in the TV series, That Girls. Altogether, she worked in 8 episodes as an executive producer.

After the series, she started the production of TV movies as an executive producer. Some of her TV movies as a producer include 2004- Deceit, 2002- Two Against Time, and 1974- It Happened One Christmas.

Apart from being an actress and producer, she is also an author. In 1972, she launched her first book, Free to be … You and Me. After that, she published her fiction book, Free to Be…a Family.

Throughout her career, she has made a net worth of $40 million as of 2022. Her earnings as an actress range from $19k to $208k. Besides that, she makes through her production works too.

Apart from that, she also earns royalties for her books as an author. Her latest book, What Makes a Marriage Last worth $15 on amazon.

To date, she has not been through any kind of controversy that created a buzz in the media. Similarly, there are no rumors about her.

Marlo Thomas is a brown-eyed brunette. Her height is 5 feet 4 inches and weighs around 56 kg.