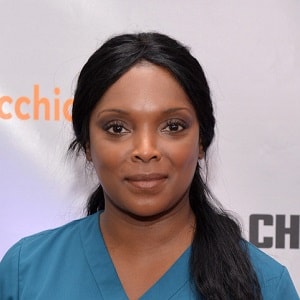 Marlyne Barrett is married to Gavin Barrett on May 15, 2009. There is no information available about her past relationship status. They do not have any children yet.

Who is Marlyne Barrett?

Marlyne Barrett is an American actress and she is well recognized for her recurring role from 2006 to 2008 as Nerese Campbell in the HBO crime drama ‘The Wire’.  She had a recurring role as Felicia Marquand in the FX legal drama ‘Damages’ in 2007.

She was born on March 29, 1970, in Brooklyn, New York, U.S.A. Her birth name is Marlyne Nayokah Affleck and she is currently 48 years old. She holds American citizenship and her ethnicity is Afro-American.

There is no information available regarding Marlyne’s education history.

She started her acting career appearing on television and stage and later co-starred with Hill Harper in the 2003 romantic comedy ‘Love, Sex and Eating the Bones’. she was a VJ for the TV station Musique Plus in Montreal, Canada in the late 90s.

She played the role of Nerese Campbell in the HBO crime drama ‘The Wire’ from 2006 to 2008 and played the recurring role as attorney Felicia Marquand in the FX legal drama ‘Damages’ in 2007.

Marlyne co-starred as Thomasina, on the short-lived NBC drama Kings in 2009.

She has made an estimated net worth of $2 million from her professional career. Her salary is not known through any sources.

She likes to keep her profile low. She has not been involved in any rumors and controversies in her personal life and professional career.

She has got black colored hair and dark brown eyes. Other information regarding her height, weight, etc. are unknown.