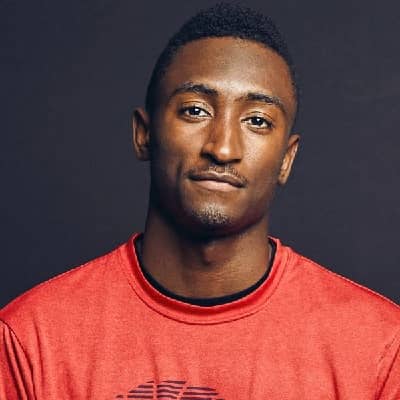 Marques Brownlee is dating a lady whose name is still not clear. She is popularly known as Nikki Hair on Instagram.

There is not much information regarding them.

Who is Marques Brownlee?

Marques Brownlee is an American YouTuber who got popularity after his technology-focused videos. He is also recognized as one of the best gadget reviewers in the world.

Brownlee is also popular for the name, MKBHD. He has also received various awards including the Shorty Award for “Creator of the Decade” in 2018.

The YouTuber was born on December 03, 1993, in Maplewood, New Jersey, the United States. He grew up in Maplewood, along with his sister.

He belongs to American nationality and is of All-American ethnicity.

Talking about his education, he has his schooling at Columbia High School and later attends the Howe School. He completes his graduation from The Stevens Institute of Technology with Business and Information Technology.

His major subject and Information System and Marketing as his minor in May 2015.

His highest score is 6-3 with a wingspan of 6-7. As of now, plays for ‘New York Rumble’ as ‘New Jersey Hammerheads’ was dissolved. Additionally, Marques has also shown his golfing skills in some of his videos.

He started his Youtube career at his young age of 15. Marques uploaded his first video in 2008.

Apart from starting his YouTube career, he was a golf player. And so some of his first videos made were on golf. He showed some of his swings in the videos.

Initially, he started to review some hardware and free software and gradually moved on to reviewing iPhones, accessories, and other gadgets available in the market.

Brownlee became a full-time YouTuber soon after graduating from college. He has his Youtube channel named, MKBHD, and likewise, directed a Youtube show Reto Tech.

There he has uncovered the origin and nostalgia of iconic tech. At first, he used to post from his apartment. Relocating to his work in the year 2016, he started to upload videos from his studio in Kearny, New Jersey using RED video equipment.

He interviewed Apple’s senior vice president of Software Engineering Craig Federighi in Oct 2016. And likely in 2018, he has an interview with Neil deGrasse Tyson in March and Tesla CEO Elon Musk with his assistance of TLD (Jonathan Morrison) in Aug.

Talking about the year 2019, he has an interview with Bill Gates in Feb, Microsoft CEO Satya Nadella in Oct, and also with actor Will Smith about Microsoft’s Surface announcement.

In addition, in February 2020, he again has an interview with Bill Gates and In Sep with Mark Zuckerberg, discussing holograms and the future of virtual reality.

During one of the 2016 Democratic presidential primary debates, Brownlee was also a part of it by asking the candidates. He asked and collect reviews about the tech companies and the government about encryption while considering rights to privacy and national security.

As of now, he has amassed more than 12M subscribers. Furthermore, in June 2018, Brownlee also appears as a guest on Hot Ones.

Marques is also the host of a Tech Podcast called the Waveform: The MKBHD Podcast and is sometimes referred to as “Waveform” and “WVFRM”.

He hosts alongside the producer of the MKBHD youtube channel, Andrew Manganelli. The podcast mostly focused on consumer electronics and surrounding topics.

He has also received various awards including the Shorty Award for “Creator of the Decade” in the year 2018.

In 2014, Marques begins an award ceremony where he awarded newly launched smartphones, based on their functionality. The awards were given under different categories like best camera, best OS, best structure, etc.

Later, Brownlee prepares it a physical award ceremony by awarding the companies with a trophy for their outstanding launches. Since 2014, Samsung and Apple have been winning consistently in certain categories.

Being one of the successful personality, his net worth is said to be $2 million. He also gets paid for being a part of ‘New York Rumble’.

This YouTuber hasn’t been in an incident that could create any rumors and controversy about him in the media.

He has black colored hair and a beautiful pair of dark brown colored eyes.

Likely, his Facebook page also holds around following. Furthermore, he has his own YouTube channel with over 12.2M subscribers.

Also, get to know the bio of other YouTubers like Jackson Mecham, Kate Elizabeth, and YourPalRoss.