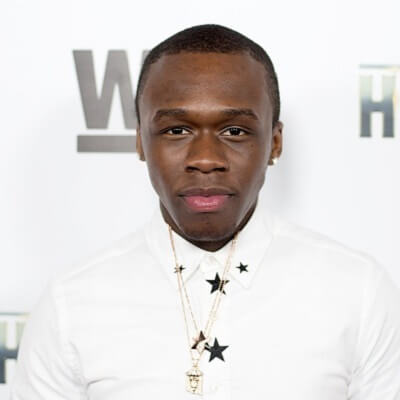 “And this is coming from someone that didn’t wish me a happy birthday''.

He was previously rumored to have been dating Tyler Royale who is also a singer.

He currently lives with his mother and sister and shares really close relationship with them.

Who is Marquise Jackson?

Marquise Jackson is 22 years old young man notable for being the eldest son of popular American rapper Curtis James Jackson III aka 50 cents. He is also a singer by profession.

Fans have appropriately nicknamed him 25 cents after his father’s stage name, 50 cents.

He fastly grabbed the public’s attention after his feud with his father. They have been feuding for years now and therefore don’t share a good relationship with his father.

Jackson was born as Marquise Diamond Jackson on October 13, 1997, in Los Angeles, CA, the USA to his father 50 cents,s and his mother Shaniqua Tompkins, who is also the then-girlfriend of his father. She is also an actress by profession.

He belongs to Afro-American ancestry.

He has a sister, Mia Jackson, and also a half-brother, Sire Jackson. Sire is currently 7 years old.

As per his education record, he graduated from St John’s Military Academy,  Delafield, Wisconsin, USA. He was really fond of playing basketball which he continued during his schooling as well. Soon he became a star prep school player at his school.

About Marquise Jackson’s feud with his father

Marquise’s feud with his dad has been going on for years now. Their feud has been taking into social media as well. The situation got worse when Jackson spent time with 50 cent’s enemy, Supreme Griff’s son.

It all started back in 2008 when Jackson was just 10 years old. Shaniqua claimed that 50 promised to give her his $4 million Long Island Mansion. He attempted to evict her from the home, and on May 30, 2008, the home burnt to the ground. Shaniqua has made claims that foul play was involved, but 50 said in 2009 that he “has just been cleared of all the accusations,” per UPI. Since then Marquise was disappointed in his father’s action and both drifted apart.

But once they were really close. 50 cent even has Marquise’s name tattooed on his right biceps. However, after the mansion incident, they don’t share a good relationship anymore.

Coming from a music background, he always had a knee interest n music. He first began his music career with the release of debut single ”Different”

He appeared in his father’s video documentary 50 Cent: The New Breed and in the documentary short A Portrait of an Artist: The Making of ‘Get Rich or Die Tryin’.

He appeared in 50 cent’s “Wanksta” segment as part of 50 Cent: The New Breed.

His other songs are ”Just Another Freestyle”,  and ”Follow Your Heart” where he has basically dissed his father.

In addition, he also has appeared in the 2017 Dope Fiend, directed by Ron Elliot. In the movie, he portrayed the character of Lil Bam.

How Much Does Marquise Jackson Earn?

The 22 years old Jackson has just started his career. However, with his star kid stardom, he must have managed to live a celebrity lifestyle.

Also, his father’s net worth is around $30 million. He earned all this money from his successful music career. But he no longer lives with him.

During this COVID-19 pandemic, he is under quarantine with his mother Shaniqua and sister Mia. But he is active on his social media and keeps on posting stories.

Jackson has dark brown eyes with black hair. He is 5 feet and 9 inches tall with a muscular body and his weight is 62 kg.

You may also know about net worth, body measurements, and the career of A Boogie wit da Hoodie, Jeezy, and Kodak Black.