Posted by MarriedBiography Posted on October 26, 2020 | In Child , Married , Net Worth
Share this 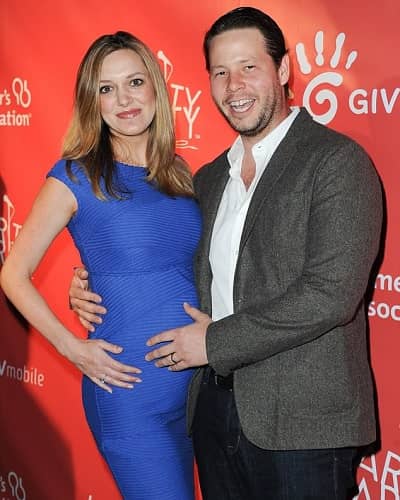 Erica Hanson is a TV producer. She has been nominated for Primetime Emmy Award in the year 2003 for Behind the Music and 2011 Undercover Boss. Hanson is the wife of American actor, comedian, voice actor & writer Ike Barinholtz.

What is the age of Erica Hanson?

Erica Hanson was born on 4th October 1978 in the USA. She is 42 years old at present. She is a year younger than her husband Ika Barinholtz. Erica is a private person when it comes to her life. She is mostly known for being the producer of multiple TV series.

Erica Hanson and Ike Barinholtz walked down the aisle in the year 2009. Since then, they are happily living together. Together, they have three children. Their daughter Foster Barinholtz was born on 16th June 2013. On 10th March 2016, they welcomed daughter, Payton.

Ike shared the news of their third child’s birth when he walked the 2018 red carpet of his new film Blockers in Los Angeles and showed off his hospital bracelet, which he hadn’t taken off. He said,

“I just had a baby. I wear [the bracelet] until it kinda falls off. Like the umbilical cord. I drank a lot of coffee today, but we have not slept in a few days, but we’re gettin’ there.”

“This is my third so there’s no more surprises. There’s only breast milk and poop, that’s all there is.”

The family of five live in Los Angeles. Erica and Ike completed a decade of married life.

How much is the net worth of Erica Hanson?

Erica Hanson’s net worth is estimated to be around $1 million. She has worked as an executive producer on No Limit Chronicles, Many Sides of Jane, Death Row Chronicles, Dance Moms, It Takes a Choir, Breaking Boston, DC Cupcakes, Undercover Boss, The Customer Is Always Right?, Kitchen Nightmares, Inedible to Incredible, Sober House, Hell’s Kitchen, American Inventor, and many more.

Her other work includes AFP: American Fighter Pilot, Behind the Music, Ultimate Albums, Between the Lines, The Swan, American Soldier, and more. As per Celebrity Net Worth, her husband Ike Barinholtz has a net worth of $400 thousand. His acting work is in Moxie, The Hunt, The Lego, The Oath, Song of Back and Neck, MADtv, Bless the Harts, Friends from College, and others.

They bought a five-bedroom East Coast-inspired home in Los Angeles’ Hancock Park neighborhood for $3.3 million in the year 2016. Similarly, they have supported many charity organizations together. Erica and Ike were awarded the Ambassador of Children Award. Also, they have consistently supported a charity organization that carters for children who have been traumatized.

Ike Barinholtz is an American actor, comedian, voice actor, and screenwriter. He was a cast member on MADtv from 2002 to 2007, Eastbound & Down (2012), and currently has a regular role on The Mindy Project.