Posted by MarriedBiography Last Modified May 12, 2021 | In Married , Net Worth , Relationship
Share this 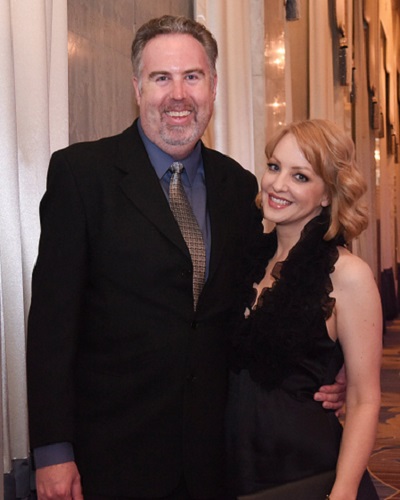 Greg Covey and Wendi McLendon walked down the aisle on 19th August 1996. They are happily married to each other for more than 23 years. Wendi met Greg when they were students in an LA community college.

Likewise, their bond has been made more solid by the long years Wendi spent trying to make it as a performer.

“I am so lucky that I have him in my corner. I really am. And I’m not letting go. I’ve got my claws in that man.”

“He was really there and the only one who was encouraging me for a time. So that meant the world to me, because sometimes you only need one person to encourage you, but it has to be the right person.”

Even though they have been married for years but the honeymoon phase for the couple is not over. Greg attends the premiers of his wife’s movies.

Greg Covey’s father passed away on 13th January 2019. He shared a very strong bond with his father. His father was like a best friend to his mother. He shared a picture of his parents’ wedding a day after his death. He wrote a few lines as a tribute to his dad.

“My father passed away peacefully yesterday. He was a great dad and husband and best friend to my mom. They were married for almost 60 years. The first pic is of their wedding. The second is of us on a cruise to Alaska in the very early 1980s. I am an only child. The last pic is of my mom and dad in Montana after retirement. He will be missed.”

My father passed away peacefully yesterday. He was a great dad and husband and best friend to my mom. They were married for almost 60 years. The first pic is of their wedding. The second is of us on a cruise to Alaska in the very early 1980s. I am an only child. The last pic is of my mom and dad in Montana after retirement. He will be missed.

Covey was very close to his parents.

Also read Sushant Singh Rajput death case: A typical Indian family and their perception of a son and prospective daughter-in-law!

How much is Covey’s net worth?

Greg Covey has an estimated net worth of $1 million. There is not much known about his work. Similarly, his wife Wendi McLendon-Covey has a net worth of $5 million. They have a house in Long Beach, California, which she bought in August 2000 for $276k. It is a 3 bedroom, 2 bathroom home built in 1720 square feet.

Wendi has worked in films like Bewitched, Reno 911!: Miami, Cook-Off!, Over Her Dead Body, Jesus People: The Movie, The Search for Santa Paws, Speech & Debate, Blush, and many others. Similarly, her television roles include in The Office, 10 Things I Hate About You, Rules of Engagement, I Hate My Teenage Daughter, Wedding Band, American Dad, Big City Greens, and others.

Greg has more than 1.8k followers on his Instagram account. He is following personalities like Lori Alan, Cory Henry, Jadie Comer, John Oates, Kerri Kenney-Silver, Alec Mapa, and many more. Covey made his first Instagram post on 7th May 2012. He is a sucker for vintage scooters.

Greg has uploaded multiple pictures of his vintage scooter added in his collection. He is also a cat lover and calls himself a ‘Cat dad’. He has reposted multiple posts from his wife’s account. On 20th August 2018 they adopted a new cat, he shared her picture and wrote,

“This is our new adoption. You can’t tell by this pic but she’s missing a rear leg. But that doesn’t slow her down at all. Her name is Wabi-Sabi.”

Wendi Anne McLendon-Covey known as Wendy Anne McLendon is an American actress and comedian. She is famous for her comedic and improvisational roles and the character Beverly Goldberg, a family matriarch, on the ABC comedy series The Goldbergs.

He was nominated for two Critics’ Choice Television Awards for Best Actress in a Comedy Series. Read more bio…