She is serving as the Senator of Tennessee. 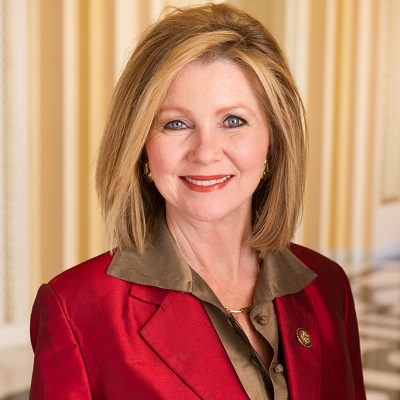 If a natural disaster strikes your community, reach out to your friends, neighbors, and complete strangers. Lend a helping hand: Technology is characterized by constant change, rapid innovation, creative destruction, and revolutionary products.: We are a nation of laws with respect and recognition of the rule of law. We are not an imperialist government with a monarch abiding by the rule of one man.

Marsha Blackburn is married to Chuck Blackburn. Her husband is the founder of the International Bow Tie Society.

Their wedding took place back in 1974. However, the story behind her wedding is still a mystery.

Together, the couple is blessed with two children including a son, Chad Blackburn, and a daughter, Mary Morgan Ketchel.

As of now, she resides in Brentwood, a suburb of Nashville in Williamson County along with her husband.

Who is Marsha Blackburn?

American Marsha Blackburn is a politician and businesswoman. Currently, she is serving as the Senator of Tennessee.

As a Republican member, she used to serve the U.S. House for Tennessee’s 7th congressional district (2003-2019).

Marsha Blackburn was born on the 6th of June 1952 in Laurel, Mississippi. Her birth name is Marsha Wedgeworth.

Her father, Hilman Wedgeworth, and Mary Jo Wedgeworth are of British ethnicity. Hilman used to be a sales manager by profession.

In 1974, she earned a bachelor’s degree from Mississippi State University with Honors in Science major in Home Economics.

When she was in college, she joined Southwestern Advantage as a student manager. Later, she worked as a sales manager for Times Mirror Company. After graduation, she joined Castner Knott as director.

Moving forward, in 1978, she started her own promotion-event event management and marketing strategies company.

– Starting the political career, Marsha Blackburn became the founding member of Williamson County Young Republicans. Later, in 1989, she became the chairperson of the party and severed till 1991.

– In 1992, she ran as a candidate for the 1992 Republican National Convention. However, she lost the election.

– In 1995, she became an executive director of the Tennessee Film, Entertainment, and music commission. She held the position till 1997.

– After that, in 1998, she elected to the Senate of Tennessee. Till 2003, she served in the Senate. The same year, she became an assistant whip in Congress.

– In 2002, she was elected to be the U.S. Representative from Tennessee’s 7th District defecting Democrat Tim Barron with 70% votes. In 2004, she was re-elected for the same position.

– In 2007, she ran for the position of Republican conference chair. However, she was unsuccessful in the election. The same year, she joined the 2008 presidential campaign as a senior advisor.

Her current net worth is not available at the moment. However, her estimated net worth in 2020 was $551k.

Also, her earnings as a junior senator are in the range of $174k or above. Besides that, she also earns through her business ventures that include the sectors of retail marketing and marketing strategies.

Marsha drew significant attention during the Senate impeachment trial of President Donald Trump when she left the chamber for a TV interview. Also, she gathered attention when she read a book during proceedings.

Again, once more, she earned the attention when she tweeted against Lt. Col. Vindman mentioning him as unpatriotic.

Once more, she came in the headlines when Taylor Swift produced the documentary, Miss Americana where her action in the impeachment trial was highlighted once more.

Marsha Blackburn is a blue-eyed blonde. Her height is 5 feet 7 inches and weighs around 55 kg.

She also has a self-titled YouTube channel with 1.09k subscribers.