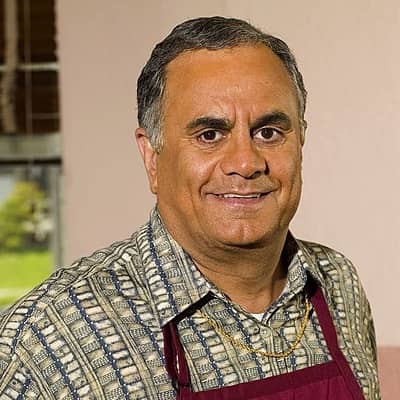 Marshall Manesh hasn’t yet revealed his marital status. Once he mentions his granddaughter so, he is possibly married.

But detailed information regarding his family is still in the dark.

Who is Marshall Manesh?

Marshall Manesh is an Iranian-American actor and Producer. He rose to fame after portraying the role of Ranjit in the series, ‘How I Met Your Mother’.

The actor was born on August 16, 1950, in Mashhad, Iran. He holds an Iran nationality unfortunately her ethnicity is unknown.

When he was young, his father passed away then he was raised by his mother. But he hasn’t disclosed his parent’s detailed information to the public.

Also, his academic history is under the curtain at the moment. In the mid-70s, he moved to the United States to pursue his career and joined the Persian Theater Group.

Marshall made his acting debut in 1987 through the movie, ‘Checkpoint‘ in the role of Abe. In 1989, he was a feature in ‘Guests of Hotel Astoria‘ in the role of Dr. Parto.

Similarly, Marshall made his big break after appearing in the action comedy film, ‘True Lies‘ which is directed by James Cameron. In the film, he was cast in the role of Jamal Khaled starring Arnold Schwarzenegger, Jamie Lee Curtis, and Tom Arnold.

Since then he appeared in more than 100 feature films, in more than 40 commercials, and in several television projects. Also, he served as a judge at the 6th annual Noor Iranian Film Festival.

Some of his creditable film and television series are,

He doesn’t involve in any disputes and controversial acts to date. He keeps staying away from such rumors and scandals that create hamper his professional life and personal life.

His main source of income is his profession as an actor. As of 2021, he has an estimated net worth of around $3 million. However, he hasn’t yet revealed his exact salary and real estate to the public.

Marshall has a grey hair color with blue pair of eyes. He stands at the height of 5 feet 8 inches tall. Furthermore, his weight and other body measurements are still under review.