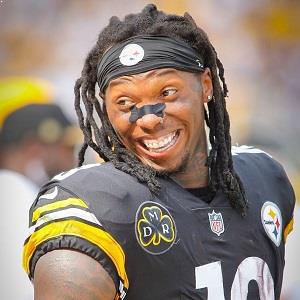 What is the relationship of Martavis Bryant?

Who is Martavis Bryant?

Martavis Bryant is an American football wide receiver for the Pittsburgh Steelers of the National Football League (NFL). Previously, he played college football at Clemson. The Steelers signed him in the fourth round of the 2014 NFL Draft.

Bryant was born in Calhoun Falls, South Carolina on December 20, 1991. He was raised by his mother, Roberta Bryant. She worked at a textile plant while taking care of him by herself and help from his grandmother.

He became interested in the world of football since his childhood years. He is of American nationality. Furthermore, he belongs to an African-American ethnic background.

Furthermore, after high school, he spent one year at Hargrave Military Academy in Chatham, Virginia in order to pass NCAA initial-eligibility standards. Eventually, he attended Clemson University in 2011. There, his first reception was for 54 yards on September 3.

In the 2014 season, his rookie season, he had a total of 26 catches, 549 receiving yards, and eight touchdown receptions in ten games and three starts. Additionally, his 21.1 yards per reception ranked first among NFL wide receivers in 2014.

Unfortunately, on March 14, 2016, it was reported that Bryant had been suspended for the entire 2016 NFL season for violating the league’s substance-abuse policy. More recently, on April 25, 2017, Bryant was conditionally reinstated by the NFL.

Bryant has an average salary of $664,805. Furthermore, he has an estimated net worth of around $4 Million.

Is Martavis Bryant involved in any rumors and controversies?

Bryant has been part of several controversies throughout his career He became part of a controversy after he was suspended the first four games due to violating the league’s substance-abuse policy on August 27, 2015.

Furthermore, he was suspended for the entire 2016 NFL season for violating the league’s substance-abuse policy during the 2016 season. Additionally, he also stirred controversies after he based his teammate on Instagram after Pittsburgh earned a huge division win over Cincinnati. At present, there are no rumors concerning him.

Talking about his body measurement, Bryant has a height of 1.96m. Additionally, he weighs 91 kg. Furthermore, his hair color and eye color is black.