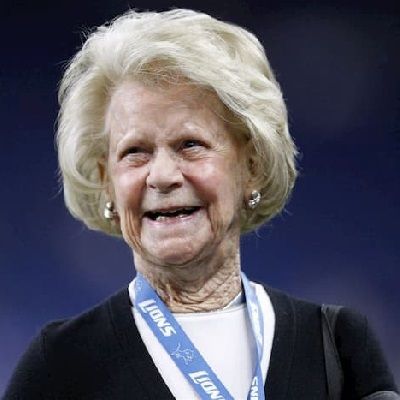 Martha Firestone Ford is a Widow. She was married to William Clay Ford. Martha met William at a lunch in New York. Their mothers arranged their first meeting and they accompanied them as well. At that time, she was a student of Vassar. Similarly, he was a naval cadet at St. Mary’s U.S. Navy Pre-Flight School.

On 21st June 1947, they got married. Their marriage ceremony was held at St. Paul’s Episcopal Church in Akron, Ohio. They both are the grandchildren of two empire-builders and belonged to a well off family.

Their marriage and love life were a great match as there was no news of dispute between the two. But tragedy occurred when William expired on 9th March 2014 at the age of 88 after 67 years of togetherness with his wife.

Son following the footsteps of his father

Martha’s son William Clay Ford, Jr. has followed the footsteps of his father. He is the former chairman of the Board of Directors of Ford Motor Company. Previously, he has been the Chief Executive Officer and Chief Operating Officer of Ford.

Who is Martha Firestone Ford?

Martha Parke Firestone Ford known as Martha Firestone Ford is an American businesswoman. Similarly, she is the principal owner and the chairwoman of the Detroit Lions of the National Football League (NFL).

Also, she is the board of the Henry Ford Health System.

She was born on 16th September 1925 in Akron, Ohio, United States. She is the daughter of father Harvey S. Firestone, Jr. and mother Elizabeth Parke Firestone. Similarly, her paternal grandparents are Harvey Samuel Firestone and Idabelle Smith Firestone.

Martha has salt and pepper hair and her eyes are blue in color.

Her grandfather was the founder of Firestone Tire and Rubber Co. She had two siblings Elizabeth Chambers Firestone and Harvey Samuel Firestone. Born in Ohio her nationality is American.

Martha attended Vassar College and graduated in the year 1946.

Martha as the owner of Detroit Lions

Her husband was the sole owner of the Lions since he bought out all other owners in the year 1963. He bought it for $4.5 million. After the death of the husband of Martha, it was announced that the controlling interest in the Lions would pass to her. At present, she is the majority owner of the team.

All of her four children has a small share in the team. Similarly, she is one of the ten female NFL team owners.

Henry Ford the founder of Ford Motor Company has a net worth of $200 billion. Martha and her husband had a house built on Lake St. Clair and they reside in Grosse Pointe Shores since 1960.

Martha is the owner and chairwoman of the Detroit Lions. In the year 2017, Martha was 92 years old and there was a headline that a group of eight Detroit Lions players kneeled down in the protest during the national anthem.

They were joined by owner Martha on the field for the protest. She was linking her arms with her daughters.