Martha is an unmarried woman.

Once, she had a relationship with River Phoenix in 1986. However, they couldn’t carry their relationship and broke up after three years in 1989.

Later, she began dating Jon Patrick Walker in 1995. Soon after dating him, the couple got engaged in the same year. Although, they couldn’t handle their relationship and split up in 1996.

Martha is still single and hasn’t tied the knot. 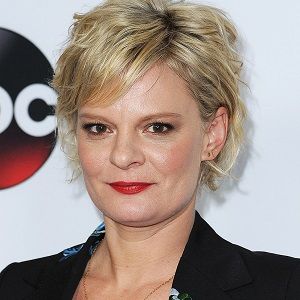 I am not a morning person. I like to sleep in

It's not common for a woman on television, especially if she's the mom of the family, to be funny. She's usually a straight man or foil

That's the thing about interviews, at some point you're going to change your mind. But it's there forever and you can't escape it.

Who is Martha Plimpton?

Martha Plimpton is an American actress, singer, and model. She is best known for her role in the movies Samantha, Raising Hope, The Goonies, and Parenthood.

Furthermore, she has also won an Emmy award for Outstanding Guest Actress in a Drama Series as well a Drama Desk Award, and an Obie Award.

She grew up in New York City along with her parents. Moreover, her grandfather is a veteran actor John Carradine. Concerning her education, she enrolled at Professional Children’s School.

From the beginning of her childhood, Martha had a keen interest in acting. Concerning her education, she enrolled at Professional Children’s School.

Martha Plimpton began her professional career as a model in the 1980s campaign for Calvin Klein. Later, she made her first appearance at the early age of eleven in a feature film named Rollover.

She came into the spotlight after appearing in the 1985 film The Goonies. In 1992, Martha appeared in the big hit Samantha. Furthermore, she has also featured as an activist in the 1993 movie Inside Monkey Zetterland.

As a TV actress, The Goonies actress has also starred as “Meg Corwyn” in the sixth season of the NBC medical drama ER.

Besides this, she is also the founder of a production company, Everything is Horrible, which has made some short movies. Additionally, she signed for the Fox sitcom Raising Hope.

In the show, Raising Hope, Martha played a brilliant role and her work has been admired and appreciated by many.

Furthermore, she got nominated for the Primetime Emmy Award for Outstanding Lead Actress in a Comedy Series. On the CBS legal drama The Good Wife, Martha played a recurring role.

Her theatre acting includes Pal Joey, Shining City, Top Girls, A Delicate Balance, and much more. Moreover, the Raising Hope beauty has also appeared in some hit TV shows such as The Good Wife, The Real O’Neal’s, Grey’s Anatomy, and much more.

Being a successful actress, she bags a massive amount of money from her profession. Currently, she has a net worth of $3 million.

So far, Martha has won several awards and honors. Martha Plimpton has won the Obie Award for brilliant Performance for Hobson’s Choice and the 2007 Drama Desk Award.

It was reported that she would voice Yelena in Frozen.

Recently, Martha faced controversy when she said, she had her “best” abortion in Seattle. In the interview, she stated, “Heads and tails above the rest, If I could Yelp review it, I totally would.

And if that doctor’s here tonight, I don’t remember you at all, I was 19. I was 19, but I thank you nonetheless.” Soon after that, many people took to Twitter to react to her interview.

Martha Plimpton has a height of 5 ft 5 inches and weighs 50 kg.

Moreover, she has beautiful blonde hair and brown eyes.

Martha Plimpton is not hugely active on social media.

Also know more about the early life, career, net worth, relationships, and controversies of other news anchors, and entertainment reporters like Betty Nguyen, Chris Wragge, Catt Sadler, and Sharon Tay.