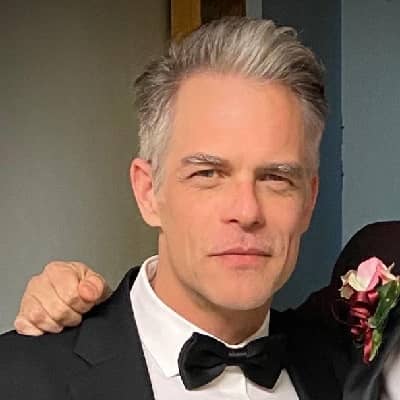 Martin Cummins’s current relationship status is married. He married to Christine Wallace on July 12, 2013. She is the second wife of Martin.

Previously, he exchanged vows with Brandy Ledford in 1998. Brandy is also a well-known American-Canadian actress. The couple together has a child a son named Grayson Cummins.

Who is Martin Cummins?

Martin Cummins is a renowned Canadian actor and director. He is widely recognized for his role as Ames White in Dark Angel.

Lately, he appeared in the character of Jack Willmore in the 2020 fiction drama series, Away.

The actor was born in North, British Columbia, Canada on the 28th of November in 1969. As of 2021, he is 51 years old. He holds Canadian nationality unfortunately his ethnicity is unknown.

Cummins’s mother’s name is Phylis Katherine (Tracey) Cummins who has already passed away. His father was a commercial fisherman whose name is not available. Likely, the identity of his siblings is also under the curtain.

Moving towards his academics, Cummins studied at Seaquam Secondary School in the town of North Delta, British Columbia, Canada.

Further, he attended the Vancouver Actors Studio where he trained under the highly respected pioneer of Canadian theatre, Mel Tuck.

Martin made his on-screen debut in the television series, Danger Bay from 1987 to 1988. Afterward, he made his feature film debut in 1989 in the movie, Friday the 13th Part VIII: Jason Takes Manhattan.

In the same year, he appeared as a host of the teen variety series, Pilot One on CBC Television. Cummins has been worked as a director in the 2000 film, ‘We All Fall Down.’ The film is all about the ironies of life, the way that drugs can completely change a person’s life, the need to be responsible for our actions, and so on.

Cummins made his career big break in between 2001 to 2002 when he starred in the character of Ames White in the series Dark Angel. The series features popular personalities like Jessica Alba, Michael Weatherly, Alimi Ballard, and other cast members.

Presently, he starred in the teen drama series, ‘Riverdale’ where he cast in the role of Sheriff Keller. Similarly, he is featuring in the role of Henry Gowen in the ongoing television series, When Calls the Heart.

– Awarded as the Best Supporting role on Love Come Down in 2000.

– Nominated for Best Performance by an Actor in a Continuing Leading Dramatic Role on Dice in 2002.

– Awarded as the Best Supporting role on When Calls the Heart in 2015.

– Nominated for the Best Supporting role on Shattered in 2000.

– Nominated for the Best Screenwriter in the 2001 drama film, We All Fall Down.

Martin has managed to maintain his clean image to date. So, he has not been part of any rumors and controversy that could hamper his prestige as an actor.

As of 2021, Cummins has an estimated net worth of $500 thousand throughout his successful career as an actor. But, the exact figure of his salary, yearly income, and real estate hasn’t yet disclosed.

The actor is 5 feet 9 inches tall whereas his weight is around 70 kg. He has grey hair color with grey pair of eyes color as well. Furthermore, his other body measurement is still under review.

Martin has a verified Instagram account where he has more than 183k followers. He follows renowned personalities like Allen Stone, Sam Alvey, Daniel DC, and more.