Martin Donovan is a married man. He exchanged his vows with actress Vivian Lanko in 1984.

He was dating Vivian previously and was in a live-in-relationship. The loving pair had moved to New York city together prior to their marriage in 1983.

The couple is currently residing in Vancouver, British Columbia, Canada, and has two sons. namely, Micah Donovon and Austin Donovon. 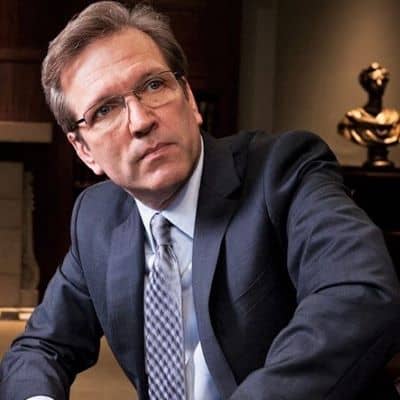 When you are raised Catholic there is one thing that you are confronted with at a young age, and that's death. You're confronted with all the big issues - and that sparks deep questions, like what the hell are we doing here anyway?

I'm a sucker for entertainment and escapism as much as the next person. I like silly and lowbrow stuff, but I get nervous when I indulge in that too often. I want to know what's going on in the world. I have a morbid fear of being surprised by bad news. I want to anticipate everything.

Who is Martin Donovan?

He was born Martin Paul Smith on August 19, 1957, in his birthplace Reseda, Los Angeles. According to western astrology, he is a Leo zodiac. He is 64 years old as of today.

He has three siblings. Moreover, the additional details about his siblings’ and parents’ profession are concealed.

Coming to his educational background, he graduated from Crespi Carmelite High School and attended Pierce College for two years.

He appeared in the plays Richard’s Cork Leg by Brendan Behan and Private Life of the Master Race by Bertold Brecht there only.

After moving to New York City, he worked in installing drapery to sustain in the city. Even he joined the off-off-Broadway Cucaracha Theater on Greenwich Street the same year.

To date, his acting career is three-decades-long. In the early 2000s, he played Detective Hap Eckhart in Christopher Nolan’s psychological thriller Insomnia (2002). While his latest role is the Protagonist’s CIA handler, Fay, in Nolan’s science fiction action thriller film Tenet (2020).

He has appeared in fourteen episodes of the Showtime television series Weeds. He co-starred Mary-Louise Parker and was nominated for a SAG Award for Outstanding Performance by An Ensemble in a Comedy Series.

Additionally, he also worked with Parker in Saved! and Pipe Dream. They were also seen together in The Portrait of a Lady, which won the National Society of Film Critics’ Award for best supporting actor.

He has worked for the director Hal Hartley, such as starring as Jesus Christ in the Book of Life, Tom Gordon on Ghost Whisperer. He also portrayed Peter Scottson on Showtime’s cable series Weeds. Likewise, he has also said,

‘Hal and I are close friends. I understand his language, his humor, his film language, what he is trying to say. I tell actors who are new to Hal–this is more like dance. It’s not acting naturalistically, it’s carefully choreographed. Gestures are important and specific gestures are very important.’

He made his writing/directorial debut with the film Collaborator (2011).

Talking about his good fortune, he has riches worth $1.5 million. His acting journey has made him earn a handsome paycheque and thus live a lavish life. His exact salary details however are not disclosed yet.

To date, he has managed to keep himself away from unnecessary rumors and controversies that impact his personal and professional out front.

Moving onto his body features, he has a height of 6 feet and average body weight. His exact body details like shoe size, dress size, biceps size, and chest-waist measurements are currently missing.

He has blue eyes while his right eye is smaller than the left. Also, he wears spectacles and has brown hair. He has a fair body complexion.