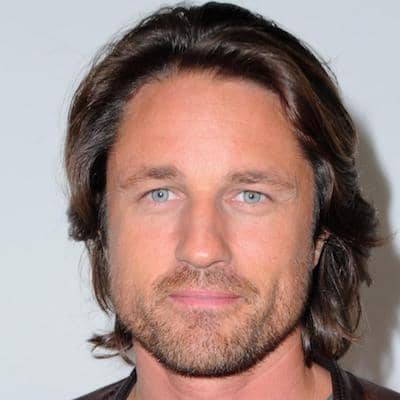 During the shoot, when you're not at work, you're learning lines for the next shoot, and that can be all-consuming

I always thought I'd go to university and then get a real job, you know. Now I want to do stuff that really makes me happy. Although I'm still trying to work out what that is. But for me there are always constants

I like dramatic stuff, and I have a goofball side, too. I like to do comedy and off-beat things as much as something really, really serious.

Martin Henderson at the present time is in a relationship. He and his girlfriend Aisha Mendez are living together in LA.

As per the sources, they moved in together in May 2020.

Martin was seen briefly with Marnette Patterson, Nicky Watson in 1994, and Aishwarya Rai Bachchan in 2004.

Who is Martin Henderson?

Martin Henderson is a New Zealand-born actor and model. He is popular for his acting skills in Kick, Little Fish, Sweat, and more.

His upcoming movie Hellbent where he plays the role of Jeb Dupre is completed and will release soon.

His birthdate is 08 Oct 1974 and he was born in Auckland, New Zealand. The name of his mother is Veronica Henderson while his father is Ian Henderson.

Martin’s ancestry is Scottish and has a brother. He has citizenship of four countries, New Zealand, England, America, plus Australia.

Regarding his academics, he first attended Birkenhead Primary Northcote Intermediate, and then he went to Westlake Boys High schools.

Martin Henderson is a popular face of the entertainment world. His first movie was named Kick of 1999 where he played the role of Tom Bradshaw. For this, he was nominated for AFI Award.

The list of his other notable TV series are,

By the recorded reports of 2021, he has accumulated a net worth of around $6 million US. The annual salary from his acting journey is behind the curtain.

This AFI Award-nominated actor is keeping himself away from rumors and desperate scandals.

Martin Henderson’s height is 5 ft 10 inches and his body weight is 70 kg. Moreover, he has blue eyes and his hair is in light brown color.

He is dating a girl named Aisha.

Where does Martin Henderson live now?