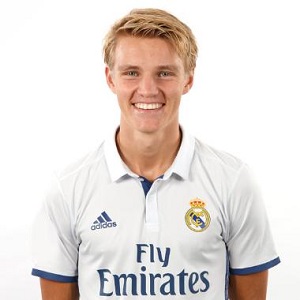 What is the relationship of Martin Odegaard?

Martin Odegaard is unmarried till now. He is currently in a relationship with a girl named Oda Burud. He began dating Oda in 2015. He often posts pictures of his girlfriend on social media.

The couple has been together for two years now and their relationship is going very well. There are no other records of his past and present relationships.

Who is Martin Odegaard?

Martin Odegaard is a Norwegian professional footballer. He currently plays as an attacking midfielder for Real Sociedad.

Talking about his early life, he was born on 17 December 1998, in Drammen, Norway. He is the son of Hans Erik Ødegaard and Lene Cecilie Ødegaard. His father is a former footballer.

His parents were the co-founders of the local sports club Drammen Strong.

Martin has not revealed much information about his childhood life. His educational background is unknown. He usually doesn’t talk about his private life in the media and public.

He prefers people focusing on his work rather than his personal life. His nationality is Norwegian and he is of Norwegian ethnicity.

Martin Odegaard began playing football in the local sports club Drammen Strong. He spent five years at the club. The club selected him twice for the prize of 50,000 kroner.

He also received approximately €29,000 as a gift from Strømsgodset Toppfotball in 2015. In early 2015, he joined the Spanish team Real Madrid for a fee of around €3 million and became the youngest member of the Madrid team.

He then made his official Madrid debut on February 8, 2015, in the 2–2 draw against Athletic Bilbao B in Segunda División B. Martin scored his first goal for the club in a 4–0 win over Barakaldo CF at the Estadio Alfredo Di Stéfano on February 21, 2015.

Then this player joined Vitesse in 2018-19 and from there he went to another club Real Sociedad in 2019 on a loan basis.

Time magazine named Martin of the 30 most influential teenagers of 2015. Martin has represented Norway’s national team in several age games.

How much does Martin Odegaard earn?

What are the body measurements of Martin Odegaard?

Martin Odegaard is 5 Feet and 10 Inches tall. He weighs 68 kg. He has Light blond hair and blue eye.