Martin Sheen is an American actor. Martin is married and has four kids. 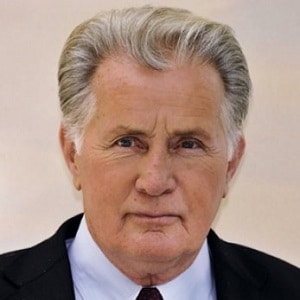 I consider myself a liberal Democrat, but I'm against abortion.

I don't like scary films. I watched Psycho (1960) for the first time recently, alone in the house at night. That was a mistake. I had to call my friend to come over.

The last thing that really turned me upside down was [Robert De Niro] in Raging Bull (1980) - a transcendent performance. It tells us that if you're not able to forgive, this is where you end up: in a dark cell.

[on missing out on the role of Michael Corleone in The Godfather (1972)] I was wrong for it but you never pass up an opportunity. I remember saying to Francis Ford Coppola - that was not the first time I had met him - "If you don't use Al Pacino in this part, it would be like benching Joe DiMaggio in his prime."

What is the relationship of Martin Sheen?

Martin Sheen is a married man. He is married to Janet Templeton. The pair married on December 23, 1961.

They have four children from this marriage, three sons and a daughter, Charlie Sheen, Emilio Estevez, Ramon Estevez, and Renée Estevez. They are all in the show business. Their marriage is going strong as there is no news regarding any extramarital affairs at present.

Who is Martin Sheen?

Martin Sheen is an American actor. People mostly know him for his roles in popular movies and television series including ‘Apocalypse Now’, ‘The West Wing’, and ‘Murphy Brown’ among others. Additionally, he also directed ‘Cadence’ in 1990.

Sheen was born as Ramon Antonio Gerard Estevez in Dayton, Ohio on August 3, 1940. He was born to parents Francisco Estévez Martínez and Mary-Ann.

His father was a factory worker/machinery inspector. Throughout his childhood years, he grew up on Brown Street.

He developed a keen interest in acting since his high school years. He is of American, Irish, and Spanish nationality. Furthermore, he belongs to a mixed ethnic background of Galician Spanish and Irish.

Talking about his education, Sheen attended Chaminade High School. Later, he failed the entrance examination for the University of Dayton deliberately in order to pursue his acting career.

Sheen initially appeared in the TV series ‘The Edge of Night’ in 1956. Additionally, in the same year, he played Jack Davis in ‘As the World Turns’.

He also had roles in ‘Route 66’ and ‘Naked City’. In addition, he co-starred in the Broadway play ‘The Subject Was Roses’ in 1964.

In 1963, he played Pvt. Arthur Dix in ‘The Outer Limits’. Since then, he has appeared in numerous other movies and television series.

Furthermore, he has also produced several movies and television series. All in all, he has over 200 credits as an actor.

Some other movies and television series that Sheen has appeared in are ‘Grace and Frankie’, ‘Come Sunday’, ‘Rules Don’t Apply’, ‘Anger Management’, ‘Ask Me Anything’, ‘Amazonia’, ‘The Double’, ‘Imagine That’, ‘Talk to Me’, ‘The West Wing’, ‘Freedom: A History of Us’, ‘Catch Me If You Can’, ‘We the People’, ‘Total Recall 2070’, ‘The Darklings’, ‘The Elevator’, and ‘Sacred Cargo’ among others.

He had a role in Emilio Estevez’s ‘Bobby’. He has also been part of several activisms works. Additionally, he endorsed New Mexico Governor Bill Richardson initially and later supported Barack Obama. Furthermore, Sheen also has 6 credits as a producer. He has two credits as a director.

Sheen won the Golden Globe Award in 2001 for his performance in ‘The West Wing’. Additionally, he has also garnered other seven Golden Globe nominations.

Furthermore, he has also won the Primetime Emmy Award and ALMA Award. He received six Emmy Award nominations on ‘The West Wing’. All in all, he has 29 wins and 61 nominations to his name to date.

Sheen has not revealed his current salary. However, he has an estimated net worth of around $60 million as of 2022.

Sheen’s anti-abortion views have attracted several controversies and criticisms along his way over the years. Furthermore, he also received media attention after he revealed that his wife was conceived through rape. At present, there are no rumors concerning Sheen’s life and career.

Talking about his body measurement, Sheen has a height of 5 feet 7 inches (1.7 m). Additionally, he weighs around 78 kg. Furthermore, his hair color is Blonde/Grey and his eye color is dark brown.

Also know more about the early life, career, net worth, relationships, and controversies of other actors including Huang Xiaoming, Tyler Alvarez, and Jimmy Tatro.