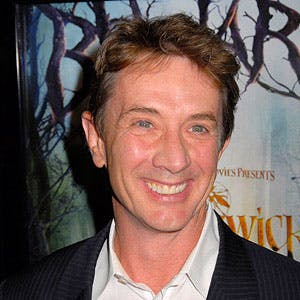 I think that we and the audience make a deal with the funny people we've known for a long time. Our deal is they make us laugh. I can sing. I've done Broadway shows. I can come on Dave Letterman's show and just sing a medley of songs. I can go as sincere as I want. But you'd always be waiting for the sandbag to fall on my head.

I don't work in anxiety. I don't work in stress. If someone's a prick, I have the person removed or I leave. The end result is a little less important than the joy of doing it. The one thing you can control is the hang - who are you going to work with, and is it going to be fun.

I don't really tour. I'll do three show here, three shows there. I like to not go too long not being in front of an audience. It's like the Tin Man in 'The Wizard of Oz' not being oiled. The more you don't do something, the rustier you become. If you do a show once a year, you're going to walk out there and just worry about lines.

Martin Short-dated Gilda Radner in the 1970s. later, he met Canadian comic actress Nancy Dolman in 1972 during the run of ‘Godspell’. The pair married in 1980.

Dolman retired from show business in 1985 to be a stay-at-home mom and raise her family. Short and Dolman adopted three children: Katherine, Oliver, and Henry. Dolman died on August 21, 2010, from ovarian cancer. At present, he is not involved in any relationship and has said that he still loves his late wife.

Who is Martin Short?

Martin Short is a Canadian-American actor and comedian. People know him for his work on the television programs ‘SCTV’ and ‘Saturday Night Live’. Additionally, he starred in comedy films, such as ‘Three Amigos’, ‘Innerspace’, ‘Three Fugitives’, and ‘Father of the Bride’ among others.

Short was born in Hamilton, Canada on March 26, 1950, as the youngest of five children of Olive Grace, a concertmistress of the Hamilton Symphony Orchestra and Charles Patrick Short, a corporate executive with Stelco. He had three older brothers, David (now deceased), Michael, and Brian, and one older sister, Nora.

He had a rough childhood as when he was 12, his mother died of cancer in 1968, his father two years later of complications from a stroke. Furthermore, he belongs to a mixed ethnic background of Irish and English. He is of Canadian-American nationality.

Talking about his education, Short attended Westdale Secondary School and graduated from McMaster University with a Bachelor of Arts degree in Social Work in 1971.

Short initially intended to pursue a career in social work; however, he became interested in acting once he was cast in a Toronto production of ‘Godspell’. In 1979, he starred in the US sitcom ‘The Associates’. Additionally, in 1980, he joined the cast of ‘I’m a Big Girl Now’, a sitcom starring Diana Canova and Danny Thomas.

Short joined ‘Saturday Night Live’ for the 1984–85 season. He has since then appeared in several other movies and television series. All in all, he has more than 90 credits as an actor. Some other movies and television series that he has appeared in are ‘The Simpsons’, ‘BoJack Horseman’, ‘Modern Family’, ‘Maya & Marty’, ‘Difficult People’, ‘Unbreakable Kimmy Schmidt’, ‘Mulaney’, ‘Working the Engels’, ‘Frankenweenie’, ‘How I Met Your Mother’, and ‘The Santa Clause 3: The Escape Clause’ among others. Furthermore, Short has continued to tour in his one-man show, which features many of his best-loved characters and sketches. He has also actively campaigned for the Women’s Research Cancer Fund.

Short won the Primetime Emmy Awards in 2014. Previously, he garnered the same award nominations in the years 1983, 1988, 2003 and 2010. Additionally, he won the Sir Peter Ustinov Award in 1999. He also garnered the BTVA Feature Film Voice Acting Award nomination in 2013 and 2015. All in all, Shore has 10 wins and 38 nominations to his name as an actor. He also won the Tony Award for Best Actor in a Musical for ‘Little Me’.

Short has not revealed his current salary. However, he has an estimated net worth of around $ 25 million.

Short became part of controversy due to an awkward interview between him and Kathie Lee Gifford where Kathie asked him about his wife – not realizing she had died two years ago.

Furthermore, he became part of another controversy after he comically portrayed Dr. Fredric Brandt in ‘Unbreakable Kimmy Schmidt’ who ended his own life recently, causing the television media to reflect on the impact of parody on the lives of those being teased. At present, there are no rumors concerning Short and his career.

Talking about his body measurement, Short has a height of 5 feet 8 inches (1.73 m). Additionally, he weighs around 68 kg or 149 pounds. Furthermore, his hair color is light brown and eye color is blue.