Navratilova had a long-term relationship with Judy Nelson, whom she met at a tournament in Fort Worth in 1982. Their split in 1991 resulted in a televised palimony lawsuit that was settled out of court. 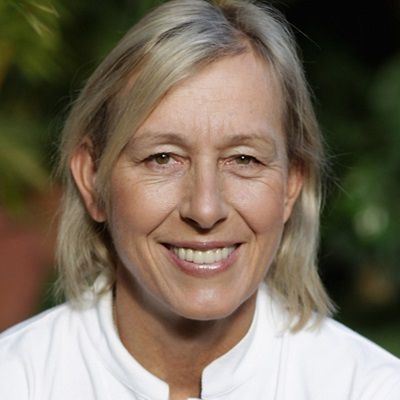 I have a great family, two children to take care of. Then, of course, I do a commentary on TV. I do speak about various women's issues around the world - like LGBT, motivational speeches. I have a lot on my plate right now. But eventually, yes, I would like to pass on the knowledge and something that I would like to do.

The difference between involvement and commitment is like ham and eggs. The chicken is involved

the pig is committed.

I'll do some running with the dogs, ride a bike

if I go to the gym it's usually for cardio. I don't do weights as much

every once in awhile, I throw in some pushups and do leg exercises to strengthen my legs.

Who is Martina Navratilova?

Martina Navratilova is a six-time Wimbledon champion. She is an eminent tennis player and coach.

Martina has also authored a series of fictions and is active in the gay rights movement.

Martina Navratilova was born Martina Šubertová on October 18, 1956, in Prague, Czechoslovakia. She is a  Libra.

Her father is Mirek Subert, who was a professional ski instructor. Mr. Subert committed suicide when she was just 9. Her mother, Jana Navratilova is an accomplished gymnast, tennis player, and ski instructor.

She has a sister, Jana Navratilova, and an older half-brother.

Martina’s parents divorced when she was three,  her mother remarried a man named Mirek Navrátil. Navratilova eventually adopted her stepfather’s last name, tweaking it slightly by adding a feminine “ova” at the end.

She began playing tennis at a young age and was one of the top female tennis players in the world in the late 1970s and early 1980s.

She was hitting tennis balls off a cement wall at the age of 4. However, by age 7, she was playing regularly, working with Mirek, and spending hours on the court each day, working on her strokes and footwork.

Navratilova began taking lessons from Czech champion George Parma, who further refined the young player’s game. When she was 15, she won the Czech national championship. In the year 1973, she turned pro and began competing in the United States.

She won her first Grand Slam tournament with a victory over American Chris Evert at Wimbledon in 1978. Martina was the most dominant player in women’s tennis in the year 1980.

Navratilova captured both the Wimbledon and the French Open crowns and would go on to lose only six matches from 1982 to 1984. She retired from singles play in 1994 but continued to play in doubles matches.

Women’s Sports Foundation declared her sportswoman of the year consecutively from 1982 to 1984.

Navratilova published an autobiography, co-written with The New York Times sports columnist George Vecsey, titled Martina in the U.S. and Being Myself in 1985.

She co-wrote a tennis instruction book with Mary Carillo in 1982, entitled Tennis My Way. She wrote three mystery novels with Liz Nickles

She won her WTA’s David Gray award in the year 1996. Martina became the Wimbledon champion during 1978-79, And also became the Australian Open champion in 1981. She was WTA Team of the Year yet again from 1981-89 along with Pam Shriver.

Navratilova gave an interview to New York Daily News sports reporter Steve Goldstein, coming out as bisexual and revealing that she had a sexual relationship with Rita Mae Brown.

Navratilova revealed that she had breast cancer. After 6 months of treatment, she became cancer-free.

She is a blonde with blue eyes height 5 feet 8 inches and weighs 64Kg.