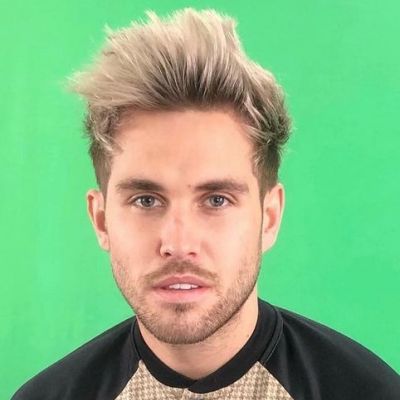 Who Is Marty McKenna Dating?

The British 28-year-old reality star, Marty is dating an Italian tv star, Elettra Lamborghini, at present, according to the sources.

Besides, there is no further info on their relationship like, who approached first, and how it all began.

The couple had an on and off-screen affair. In 2016 after meeting on the show, Geordie Shore. However, in August 2017, Chloe no longer wish to be with Marty.

McKenna started dating Sarah in 2014. After three years of dating, they split up in 2017.

Previously he dated Jemma, but the exact date of their dating period is still unknown.

Who is Marty McKenna?

Marty McKenna aka Martin McKenna is a popular British reality star, model, and social media influencer. He is well known for his appearance in popular television shows, including Geordie Shore and Ex on the Beach.

Similarly, he belongs to the English ethnic background while his birth sign is Leo.

The star has not revealed further details related to his parents, siblings, and early educational period.

Finally, Marty wanted to be the Royal Regiment of Fusiliers, that’s why he went to the British Army at Army Foundation College, Harrogate in September 2010.

Afterward, he registered for a Discharge as of Right (DAOR), in March 2011 and ended his British Army career.

In 2015, Marty made his tv debut by appearing in the third series of the Britsh reality series, Ex on the Beach as the ex of Jemma Lucy.

Later, his former girlfriend, Sarah Goodhart joined the show, but he left the show in the middle because of dehydration.

Following that, in October 2015, he joined the British reality television series, Geordie Shore in the 12th season and left the show in the 15th series.

In 2022, Marty joined the 11th season of the British dating reality series, Celebs Go Dating. The show aired in January 2022.

What Is Marty McKenna’S Net worth And Salary?

The Celebs Go Dating star, Marty has an estimated net worth of about  $1.5 Million. He has amassed a decent amount via his career as a reality tv star.

Is Marty McKenna Engaged In Rumors And Controversy?

Throughout his professional career, Marty McKenna has not been a part of any controversial news.

Rather he avoids appearing in unwanted scandals and rumors and maintains distance from his professional and personal life.

The 28 years old tv star stands at the height of 5 feet 9 inches while he weighs around 76 Kg. In addition, he has a set of dark brown eyes and ash-blonde hair.

Marty owns an Instagram account under the username, @marty_gshore, where he is followed by over 618K people.

Apart from these, the star does not appear to be active on other social media platforms like Facebook and TikTok.

Ahead of the new series!! Geordie Shore’s Chloe Ferry is revealing her split from boyfriend Sam Scott