The 45 year-old American sports journalist, Marty is a married man. He tied the knot with his longtime girlfriend Lainie Smith.

Together, they also have three children Cambron, Mia, and Vivian. Since their marriage, the couple has maintained a perfect relationship between them. Apart from her, Marty has never been involved in any affairs. Currently, Marty and Lainie are enjoying their married life and living elegantly. 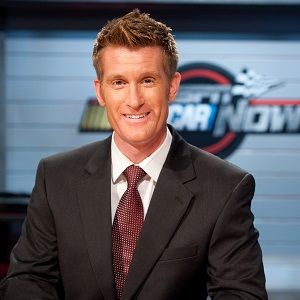 Who is Marty Smith?

Marty Smith is a sports journalist from America. He is famous for his work with ESPN. Initially, he began to report various sports such as college and professional football, basketball, and NASCAR.

Marty was born on April 15, 1976,, in Virginia, United States of America. He is 45 years old. Talking about his nationality, he is American and his ethnicity is unknown. During his childhood, he had a keen interest in football.

Concerning in his education, he attended Giles High School. Later, he completed his graduation from Radford University.

Marty began his career as a football player. Back in his college days, he was a member of the school, Giles High School’s 1993 state champion football team. Back in 2006, he began his journalism career with ESPN 2006 as a NASCAR reporter.

Furthermore, he has also appeared on NASCAR Countdown and NASCAR Now. Additionally, he will also host an upcoming. monthly interview show, SportsCenter Presents: Marty Smith’s America. So far, he has also anchored various sports such as college and professional football, basketball, and NASCAR.

Being a famous sports journalist, he earns a decent amount of money from his profession. However, his salary is unknown. As of 2022, he has an estimated net worth of $10 million.