Skip to content
Married Biography
Married Biography / Entertainment / Is Martyn Ford Married? How many children does The World's Scariest Man have? "Ford challenged 'The Rock' to fight in a ring" 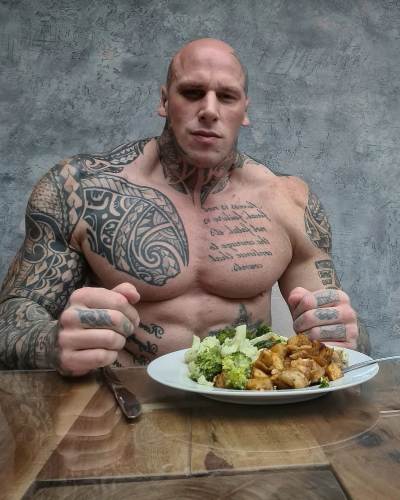 Martyn Ford, 39 better recognized as The World’s Scariest Man has scheduled to make his ring debut in April. Besides, he has made a name for himself as a successful actor, bodybuilder, and fitness freak.

He also starred in popular Academy Award winners films such as Kingsman: The Golden Circle, Fast and Furious 9, and Final Score.

He is presently preparing for his boxing match debut at the 02 arenas against Iranian Hulk whose real name is Sajad Gharibi in April. Ford has gradually lost his weight from 8,000 to 4,500 calories for his upcoming fight with Gharibi.

Talking about his physical appearance, he stands at the height of 6 feet 8 inches tall and weighed a massive 150 kg before cutting the calories.

The 39-year-old has challenged The Rock to a fight in the future. While talking to Muscle and Health about the upcoming fight, he revealed that he would love to challenge himself against The Rock in the ring.

“I’d love to challenge The Rock to a fight. We’d make a fortune. It would be a phenomenal fight, because he’s a great athlete. He’s very mobile, strong, and comes from a wrestling background.”

Also read “The world of Gennady Golovkin, a world champion boxer!! Click to know more about him!”

Ford was initially played cricket player for Warwickshire but had to leave after he got in an accident age of nineteen. He then gather the motivation to join the gym because he had a skinny physique.

According to the 2015 report of Dailymail, he had added almost 170 lbs and bulked up to a whopping three hundred and twenty-six pounds. Similarly, he was listed for the line-up in a Polish MMA organization in 2019.

Who is Martyn Ford’s wife?

Martyn is a married man. He is presently living a blissful conjugal life with his wife, Sacha Ford, and three children. Martyn and Sacha walked down the aisle on 22nd March 2019 in an intimate ceremony.

The couple has seven years of age difference. Sacha has always been by Ford’s side throughout his career. She is also a fitness freak and spends most of her time in the gym. Sacha often snaps of her in gym attire as well as workout images on her respective Instagram handle.

The beautiful couple is blessed with three children so far. In 2012, Sacha gave birth to their first child named Imogen. On this valentine’s day, Ford wrote a heartfelt message for his wife.

“Happy valentines day to this amazing lady. The mother of my 3 incredible children and someone who puts up with me and my some what selfish ways … currently I have no time for anything else but training and sleep, while she takes over nearly everything else so I can focus. Happy valentines day from myself and our tribe …”

Martyn was born and raised in Birmingham, West Midlands. His birthdate falls on the 26th of May. As of 2022, he is 40 years old. Ford has always been interested in physical fitness since childhood. During his young age, he played

cricket for Warwickshire as a bowler. He aspired to play international cricket for the England national team but unfortunately, his dreams ended after his serious injury. He suffered from a severe case of glandular fever.