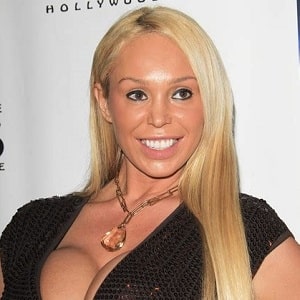 Mary Carey is a married woman. She has a husband named Dr. Joseph Brownfield, whom she married on 27 June 2018. She has been married three times.

Who is Mary Carey?

Mary Carey is a U.S adult film actress. She is also a Playboy model and a one-time candidate in the California gubernatorial race in 2003.

Carey, born on June 15, 1980, in Cleveland and raised in Florida, is an American national. Her ethnicity is Mixed (European, Native American).

She was born into a very unusual family. Both parents were mentally handicapped and her mother suffered from Schizophrenia.

Her grandparents took her in when she was 3 months old. Later on, after her parents divorced, her mother, Judy also came to live with her grandparents.

They left Cleveland and moved to Florida. After that, she was legally adopted by her grandparents.

Talking about her education, there are reports that suggest that she went to Pine Crest School in Fort Lauderdale. Later on, she went to Florida State University after she bagged the dance scholarship.

It seems largely unlikely that she actually graduated as the financial situation of her family deteriorated.

Mary Carey caught the dance fever early on when she was 12 years old and performed ‘The Nutcracker’ with Miami City Ballet. She wanted to grow up to be a Ballerina but she grew out of the ballerina body as she got older.

She has also appeared on VH1 reality shows like ‘Rehab with Dr. Drew’ in season 1 and also in the spin-off of the same show ‘Sober House’ as herself. The show is concerned about celebrities and their addiction. Carey had a problem with alcoholism.

Additionally, in 2003 she ran at California recall election for the State Governor as an independent candidate. This was meant to be a small publicity stunt as Carey had signed a contract with Kick Ass Pictures.

She ran on issues like the legalization of gay marriage, taxation of breast implants, making lap dances a tax-deductible business expense among others. She got 11,000 votes. Arnold Schwarzenegger won that election.

She is credited as an actor in 89 different movies. Some of the prominent ones are ‘Pervert!’, ‘The Junkyard Willie Movie: Lost in Transit’, ‘Trasharella’.

Carey is nominated multiple times for ‘Crossover Star of the Year’ at Adult Video News Awards. She is also the winner of XRCO Awards, the USA in the category ‘Mainstream Adult Media Favorite’.

Mary Carey has not revealed her current salary. Furthermore, her net worth is $500 thousand.

Though Carey’s life had major ups and downs, she hasn’t stirred any major controversies. Likewise, there are no rumors floating about her.