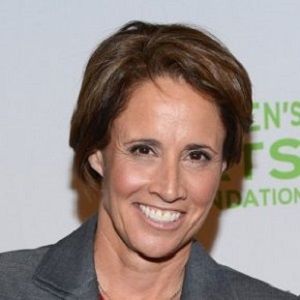 There's nothing like confidence. Your bosses will appreciate it

Mary Carillo was once a married woman. She was previously married to the Australian tennis instructor Bill Bowden. The couple got married in the year 1983. They together had two children, a son named Anthony Bowden and a daughter named Rachel Bowden. After 15 years of their marriage, the couple divorced in the year 1998. Since then, she has not been in any relationship till now. According to the records, she is possibly single at the present time.

Who is Mary Carillo?

Mary Carillo is an American sportscaster and former professional tennis player. She is currently recognized as a reporter for NBC Sports and NBC Olympics.

Mary was born on March 15, 1957, in New York City, New York, USA. She is an American by nationality and she is of North American ethnicity.

She is the daughter of American parents Anthony Carillo and Terry Sullivan Carillo. She has a brother named Charles Carillo and a sister named Gina Carillo.

Mary began her career as a professional tennis player in 1977. She was ranked as high as World No. 33 in the Women’s Tennis Association Rankings. She won the 1977 French Open mixed-doubles title with partner and childhood friend John McEnroe. Carillo and McEnroe then made it to the quarterfinals of Wimbledon, and later that year Carillo was a women’s doubles quarterfinalist at the US Open.

She is a former member of the Women’s Tennis Association’s Board of Directors. Due to knee injuries, she retired from tennis in March 1980. After that, she began working on television. Carillo began her TV career working for USA Network in the year 1980. She began working for the American public broadcaster and television program distributor, Public Broadcasting Service (PBS).

Mary worked for USA Network and PBS until 1987. She started with ESPN in 1988 and continued with them for nine years. In addition, Carillo worked as both a host and analyst on HBO’s Wimbledon coverage from 1996 to 1999. She made her debut as an analyst on NBC for the 1996 Family Circle Cup tennis event. She was named Broadcaster of the Year by the Women’s Tennis Association in 1981 and 1985.

She also won the 2010 Dick Schaap Award for Outstanding Journalism, becoming the first female recipient of the award. She currently works as a reporter for NBC Sports and NBC Olympics. In 2016, she won a Thurston Award for her storied sportscasting career.

She has a net worth of $5 million but her salary is unknown to the media.

Currently, there is no rumor of her relationships and affairs. Mary has been a big controversy while she was working as an Olympics Winter Games 2010 commentator. She ended up in controversy for her rude comments on Serena Williams during the opening ceremony. She has upset many fans by passing unnecessary comments on the tennis star Serena Williams.

Mary has a height of 5 feet 8 inches and weighs 65 kg. Her hair color is dark brown and eye color is also dark brown. Other information her on body measurement like shoe size, dress size, etc. is unknown.