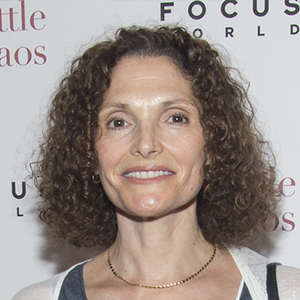 Suddenly, I realised: this was what I wanted to do. I didn't know how to do it

Some stars like to hide behind the whole idea of acting. But really good actors are not hiding at all. They're not afraid to be disliked, to be a little unsavoury

I've worked with leading men so worried about losing their charm that they were always winking to the audience.

Mary Elizabeth Mastrantonio is a married woman for a long time. She is married to Irish filmmaker Pat O’Connor. The couple got married in 1990. They together have two children named Declan O’Connor and Jack O’Connor. Mary and Pat have been married for 27 years now. They are living a happily married life for a long time and their relationship is going very well.

Who is Mary Elizabeth Mastrantonio?

Elizabeth Mastrantonio is an American actress. She is best known for her role as Carmen in the 1986 movie The Color of Money. She was nominated for an Academy Award for her role as Carmen in The Color of Money. Mary is also famous for playing Maid Marian in the film Robin Hood: Prince of Thieves (1991). In 2015, she began playing FBI agent Nasreen Pouran on the TV series Limitless.

Elizabeth was born on 17 November 1958, in Lombard, Illinois, USA. She is the daughter of parents Frank A. Mastrantonio and Mary Dominica Pagone. Both of her parents were of Italian ethnicity. She was raised in Oak Park, Illinois.

Mary attended the University of Illinois at Urbana–Champaign and Oak Park and River Forest High School. She is an American by nationality and she is of Italian ethnicity. She was interested in acting since her childhood age and began acting in school plays as a teenager.

Mary first appeared on screen in the film Scarface (1983) playing the character Gina. She rose to fame when she played the role of Carmen in the 1986 movie The Color of Money opposite Paul Newman and Tom Cruise. She was nominated for an Oscar and Golden Globe for her role in the film. Mary has also appeared on Broadway in various musicals including West Side Story, Copperfield, The Human Comedy, and the 2002 revival of Man of La Mancha.

In 1991, she played Maid Marian in the film Robin Hood: Prince of Thieves, for which she was nominated for the “MTV Movie Award for Best Female Performance”. She was also nominated for “Saturn Award for Best Supporting Actress” for the same film. In 2010, she played the lead character Capt. Zoe Callas in the TV film Law & Order: Criminal Intent. She currently plays the role as Kelly Burkhardt in the series Grimm since 2012. She also appears as FBI agent Nasreen Pouran on the TV series Limitless since 2015. Mary has a net worth of 2 million dollars.

She has a height of 5 feet 5 inches with a bodyweight 54 kg. She has light brown hair color and her eye color is brown.