Mary J.Blige is a divorced woman. She had married to her manager  Martin “Kendu”  on 7th December 2003. But the relationship did not last long and they both separated from each due to irreconcilable differences in 2016.

Besides this, there isn’t more information about her past as well as her future plans on social sited. 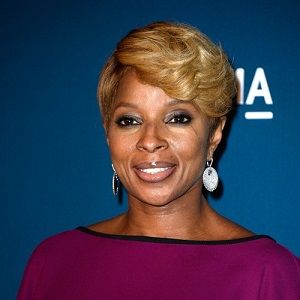 You can hate me. You can go out there and say anything you want about me, But you will love me later because I told you the truth: I do consider myself part of black history: You demand respect and you'll get it. First of all, you give respect.

Who is Mary J. Blige?

Mary J. Blige is a singer, songwriter, record producer, as well as and actress. She belongs to American society. She has been nominated in many of the categories as well as won some titles.

In 2013, she had sold 75 million records worldwide and ranked as the most successful female R&B/Hip-Hop artist of the past 25 years.

Mary was born on 11th January 1971 in  New York City. She is the second child of mother Cora, a nurse, and second to father Thomas Blige, a jazz musician. When she was a child her mother used to earn and feed them.

Then they moved to Schlobohm Houses in Yonkers, New York, immediately north of New York City, where she lived with her mother and older sister. Besides this, she hasn’t revealed any information about her birth facts and her childhood.

She had dropped her high school in her junior year. Besides this, she hasn’t revealed any kind of information on social sites.

She started her career in 1988 where she recorded an impromptu cover of Anita Baker’s “Caught Up in the Rapture”. She had also released  What’s the 411? in 1992, to positive reviews from critics.

She had sold this album  3,318,000 copies in the US until 2010. The name of this album was derived from Blige’s past occupation as a 4-1-1 operator. Her second album Uptown Records/MCA Records was released in 1994.

This album had sold 481,000 copies in its first week and remaining atop the Top R&B/Hip-Hop Albums chart for an unprecedented eight weeks. Likewise, she had released her third album  Share My World in 1997.

While moving towards her acting career, she started acting in 1988. She had debuted on the sitcom The Jamie Foxx Show playing a character, the apparently southern Ola Mae.

She had also starred rapper Q-Tip in the independent film Prison Song in 2001 and made a cameo on the Lifetime network series, Strong Medicine in the same year.

Likewise in 2004, she starred in an Off-Broadway play, The Exonerated,  MTV Films biopic on American singer/pianist and civil rights activist, Nina Simone in 2005 and on Ghost Whisperer, in an episode called “Mean Ghost” in 2007.

Similarly, in 2017, she had starred in the period drama film Mudbound directed by Dee Rees.

While moving towards her awards and achievements, she has been nominated and won many awards.

She hasn’t mentioned her salary on social sites but her net worth is $20 million.

Like other celebrities, she has suffered from Rumours as well as controversy. Her recent Rumours were she had turned actor Rebecca Nicholson and tells about her heartache, reborn hope, and why she sometimes needs to get away from herself.

Mary has mentioned her body measurement of about 36-32-38 inches. Besides this, she has also mentioned her height which is about 179 cm, the weight of 66 kg, Bra size 34b, shoe size 8(us) and dress size 10(US). She has beautiful dye blonde hair color and brown colored eyes.