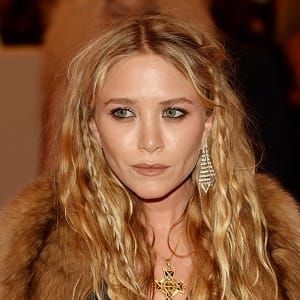 I am a really bad test taker. I can get straight As in school, but I get nervous on test.

We get along really well, but television and film aren't reality. We're best friends, but we do have our fights!

We have been roommates our entire lives. We just bought a place together.

I'm a person that has high highs and low lows. A lot of things make me sad. Sometimes, it's almost easier to be sad. But you do end up finding a balance, and I think that as I get older, I am learning what I can do for myself to make me happy.

However, after five years of marriage, this couple has announced that they are separating. In mid-May 2020, Mary filed for divorce case against Olivier. In January 2021, the divorce was finalized.

Who is Mary-Kate Olsen?

Mary-Kate Olsen is an American former actress, fashion designer, businesswoman, author, and producer. She along with her twin sister has co-founded several luxury fashion brands including The Row Olsenboye and StyleMint.

Olsen was born in Sherman Oaks, Los Angeles, California on June 13, 1986, to parents Jarnett Olsen and David Olsen. Her father is a real estate developer and mortgage banker and her mother is a personal manager.

Additionally, apart from her twin, Ashley, she has an older brother, Trent, a younger sister, Elizabeth Olsen. Furthermore, she also has two half-siblings, Taylor and Jake, from her father’s second marriage. Her parents divorced in 1996. She is of American nationality.

At present, there are no details available about her ethnic background. In addition, she became involved in the world of acting from an early age.

Mary-Kate Olsen initially began her acting career when he and her twin sister were hired to share the role of ‘Full House’. She was just nine months old at the time. Additionally, in 1992, she starred in the ‘To Grandmother’s House We Go’. Later in 1993, she was cast alongside her sister in another movie ‘ Double, Double, Toil and Trouble’.

In addition, in 1994, Olsen appeared in ‘The Little Rascals’, and ‘How the West Was Fun’. Since then, she has appeared in numerous other movies and television series. All in all, she has over 50 credits as an actress.

Some other movies and television series that Olsen has appeared in are ‘Beastly’, ‘Samantha Who?’, ‘The Wackness’, ‘Weeds’, ‘Factory Girl’, ‘Charlie’s Angels: Full Throttle’, ‘The Challenge’, ‘So Little Time’, and ‘Two of a Kind’ among others.

Additionally, she also has 16 credits as a producer. Apart from her work in movies and television, Olsen along with her sister Ashley began working in collaboration on a string of fashion lines available to the public. They also co-authored, ‘Influence’ in 2008. Furthermore, they teamed up with TOMS Shoes to design footwear for kids in 2011.

Olsen won EDA Special Mention Award in 2008 for her performance in ‘The Wackness’. Additionally, she has also won Franchise Performers Award, Blimp Award, and Young Artist Award. All in all, she has 10 wins and 9 nominations to her name to date.

Olsen has not revealed her current salary. However, she has an estimated net worth of around $150 million at present.

Olsen made the news in 2007 after she was hospitalized for a reported kidney infection on November 20. Additionally, she also announced she had entered treatment for anorexia nervosa in 2014.

Over the years, Olsen has received several criticisms and has been part of several controversies due to her fashion choices. Her decision to wear fur has divided opinions. There have also been several rumors about her cosmetic surgery.

Talking about her body measurement, Mary-Kate Olsen has a height of 5 feet 2 inches or 157 cm. Additionally, she weighs around 52 kg or 108 pounds.

Although Olsen is not active on social media, she has a number of fan pages on several social media platforms. Her fan page on Twitter has more than 150k followers.

Additionally, her Instagram fan page has over 175k followers.