Blogger Mary Katherine Ham is a mother of two. 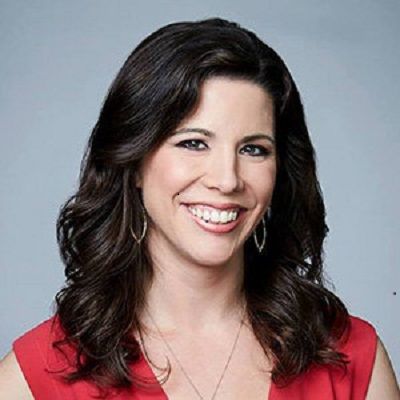 "I lost part of my heart when I lost Jake."

What is the relationship of Mary Katharine Ham?

Mary Katherine Ham and the late Jake Brewer wed in 2011, beside the Lake Anna in Virginia, USA.

The late Jake Brewer is a former White House aide and they met during a media panel discussion. On 19th September 2015, Brewer died from a fatal injury that he sustained in an accident during a charity bike race. Mary was then expecting their second child.

Who is Mary Katharine Ham?

Mary Katharine Ham is an award-winning American newscaster and journalist.

Mary Katharine Ham is a Senior Writer at The Federalist and a CNN Political Commentator who co-moderated a 2016 GOP primary debate with ABC in New Hampshire.

She is the co-author of “End Of Discussion: How the Left’s Outrage Industry Shuts Down Debate, Manipulates Voters, and Makes America Less Free”.

Mary is the recipient of the 2014 CPAC Blogger of the Year.

Mary Katharine Ham was born on 5 April 1980 in Montgomery, Alabama, the US to Jon Ham and his wife. Mary was raised in Durham, North Carolina.

Mary’s grandfather, the late J.W. Ham, was a career cryptographer in the Army Signal Corps from 1940 to 1966.

Mary’s father Jon Ham is another renowned journalist. Jon Ham was the Vice President of the John Locke Foundation or the JFL, from February 2005 to 2016 August.

He was also the publisher of Carolina Journal till he retired in August 2016, and also worked as the Managing Editor for 13 publications in Durham, N.C., and as Director for four digital publications.

Before joining The Durham Sun in 1985, Jon did three years of doctoral work in political science at Duke University.

In 2002, she finished her Bachelor of Arts in Journalism from the Henry W. Grady College of Journalism, Georgia, United States.

Thereafter, Mary completed her studies in journalism and mass communication at the University of Georgia, Athens, Georgia.

More about the University of Georgia- it was founded in 1785 and is one of the oldest public universities in the United States.

She started in journalism at the Richmond County Daily Journal as a columnist and managing editor. Thereafter Mary worked at The Washington Examiner.

Mary then joined CNN in 2016, after working for FOX and The Federalist for almost a decade.

It is a talk-radio format operated and owned by Cumulus Media. WMAL is co-owned with sports radio station WSBN at 630 kHz; the WMAL call sign and talk format originated on that station, and the two stations simulcast from 2011 to 2019.

Around 2005, Mary Katherine created a video blog series for Townhall.com. Then another video series for the HamNation- the “Sopranos DC” which ended in June 2008.

Mary has also appeared as a guest on shows and series like The O’Reilly Factor, Red Eye w/ Greg Gutfield, and The View.

More on Mary’s Career- A Synopsys

Staff writer for the Weekly Standard.com

Editor-at-large, 2014 at Editor-at-Large at Hot Air

Columnist/Editor of Townhall.com from 2005 to 2008-townhall.com

Mary Katharine is the co-author of “End Of Discussion: How the Left’s Outrage Industry Shuts Down Debate, Manipulates Voters, and Makes America Less Free”

Keep on reading the review…

Mary Katharine Ham is a Senior Writer at The Federalist and a CNN Political Commentator who co-moderated a 2016 GOP primary debate with ABC in New Hampshire.

This is a review taken from Amazon on August 1, 2017, for the paperback ” End of Discussion: How the Left’s Outrage Industry Shuts Down Debate, Manipulates Voters, and Makes America Less Free (and Fun), by Mary Katharine Ham and Guy Benson.

“With a new foreword for the paperback edition that reflects the election and the recent uproar surrounding right-leaning speakers on college campuses, this unapologetic conservative duo featured on FOX News, Townhall, The Federalist, and CNN combat the silencing of free speech in America.”

“They’re trying to silence you. But don’t let them dictate the End of Discussion.”

In the age of Trump, a prejudice against free speech is spreading, fueled by a growing movement that believes ideas must be squelched to “protect” people.

The presidential election of 2016 should have been the clearest sign yet to the Left that trying to convince half the country to shut up is not the same as actually convincing them.

And yet, in its wake, the impulse to stifle and punish “incorrect” viewpoints, and the “deplorable” who voice them, is alive and well.

It’s a vicious and ironic cycle, especially in academia, where dissenting speech is deemed dangerous and equated to violence — while actual violence is justified to bully its proponents. From Berkeley to Middlebury, the mob is on the march.

Free speech isn’t always pretty, but it’s vital to the American way. We have to make America talk again. End of Discussion arms readers to find their voices and fight back against the death of debate.”

“This book needed to be written, needed to be published, and needs to be read. Best of all, it’s great fun to read.” —Brit Hume.

“Here’s why I can wholeheartedly endorse and recommend this book: Mary Katherine Ham and Guy Benson are really good writers.

This book had me laughing out loud on yesterday’s flight.” —Jim Geraghty, a contributor to National Review.

-2014.Blogger of the Year Award- American Conservative Union (ACU)
-2007, 11th November, “Video of the Year”, the Weblog Awards
-2007, “Video of the Year” the “Sopranos DC,” the Weblog Awards
-2006, Golden Dot award for Best Vlog of 2006 from the Institute for Politics, Democracy & the Internet
More about Golden Dot: A number of research centers and institutes are based at George Washington University (GW), a university in Washington, D.C., in the United States.

“On the sad demise of Mary Katherine’s husband’, ColumbiaDailyHerald.Com stated that ‘though Mary was a conservative pundit and her husband a liberal activist- when they were home nothing mattered more than what they had for each another’.’

The death of Jake Brewer caused A serious financial setback for the widow Mar. As such, Jacob’s friends and relatives started a GoFundMe to raise about $200,000for the widow Mrs. Mary Katherine Brewer and her children.

Consequently, they were able to raise more than 70% of the targeted financial assistance.

She is a brunette with hazel eyes. Mary is 5 feet 3 inches tall.

She has more than 247k followers on Twitter. Check out what Mary had to say on her Twitter account on Feb 25, 2018 (@mkhammer) to a not-so-politically-correct follower- “am at CNN, Immune to Mommy shaming & mobs.

Damn Good Dawg… Author of “End of Discussion,” I have arresting smirk face, & disagree with people for a living. Washington, D.C.”

You may also want to read about the loves and life of international personalities like Patrick Patterson, Miss Fame, Charlene Gehm-MacDougal, (ballerina), and Jacquelyn Verdon-Frazier.