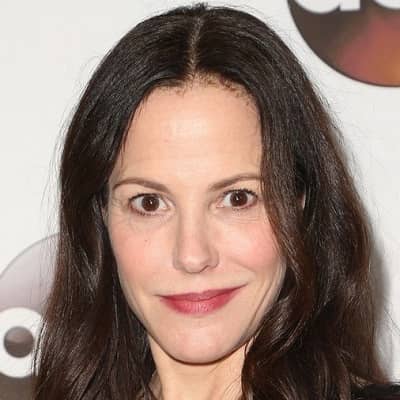 My Way to combat anything is just to walk straight into it with my fists up.

People have a problem with me being different, but I can go to a lot of different places with this face.

Mary Louise Parker’s current marital status is Single. Previously, she has been in a relationship with an actor, Billy Crudup. The couple dated for over 7 years from 1996 to November 2003.

Together, the pair has also a son named William Atticus Parker who was born on the 7th of January 2004. Parker was seven months pregnant with their son, William when Billy walks out with their relationship.

Billy had split up their relationship with Parker for actress Claire Danes. Afterward, Parker started dating Jeffrey Dean Morgan who is also an actor in December 2006.

She has also an adopted daughter named Caroline Aberash Parker whom she adopted from Ethiopia in September 2007.

Who is Mary Louise Parker?

Mary Louise Parker is an American renowned actress, theater artist, and writer. She emerges the popularity after appearing in the films like Fried Green Tomatoes (1991), Boys on the Side (1995), The Portrait of a Landy (1996), The Maker (1977), and more.

The actress was born in Fort Jackson, South Carolina, U.S on August 2, 1964. She is of American nationality and belongs to mixed ethnicity of Swedish, English, Scottish, Scots-Irish/Northern Irish, German, Dutch.

She is the youngest child of her parents John Morgan Parker (father) and Caroline Louise (mother). Her father served in the U.S. Army as a judge.

Because of her father’s profession, she spent his childhood in different countries like Tennessee, Texas, Thailand, Germany, and France.

She has also three more siblings whose details are unknown. Moving towards her academics, he attended the Marcos de Niza High School in Arizona.

Further, she later joined Mary Louise Parker’s North Carolina School of Arts and graduated with majors in Arts in 1986.

Mary got her first role in the soap opera Ryan’s Hope in the 1980s. Then she moved to New York where she appeared in a few minor roles before becoming a successful stage actress.

In 1990, she made her Broadway debut playing the lead role of Rita in a production of Craig Lucas Prelude. She appeared on off-Broadway in Paula Vogel’s “How I Learned to Drive” in 1997 at Vineyard Theatre. Lately, she portrayed the role of Bella Baird in the production of The Sound Inside at Studio 54 Theatre.

Similarly, she made her debut film in 1989 through the movie, ‘Signs of Life’ where he portrayed the role of an abused girlfriend as Charlotte. In 2001, she played the role of Amy Gardener in the political drama television series, The West Wing.

She got the lead role in the dark comedy television series “Weeds” in 2005 which went on till 2012. In the series, she portrayed the role of Nancy Botwin for 102 episodes.

Also, the production is planning to make another sequel of the series titled Weed 4.20 aired on Starz featuring Parker as a lead character. In November 2019 it was revealed but they haven’t yet revealed its releasing date to date.

Moreover, some of her notable film and television series are,

On the other hand, she is also the author of “Dear Mr. You” published on November 10, 2015. Furthermore, her writing has appeared in The Riveter, Esquire, Bust, and The Bullet.

– In 2003, she nominated in the category of Outstanding Performance by an Ensemble in a Drama Series, The West Wing.

– Similarly, she nominated for Outstanding Performance by a Female Actor in a Comedy Series, Weeds.

– In 2004, she won the Best Supporting Actress award for her role in Angels in America.

– She won the Best Actress award for the television series, Weeds.

To date, Parker has managed to maintain her clean image in the public. She has not been part of any sorts of rumors and disputes that create headlines in the media.

As of 2021, Parker has an estimated net worth of around $16 million throughout his successful career as an actress.

Before these, she has already sold a 10-room duplex of Manhattan’s West Village for $7.45 million. Moreover, her other assets, salary, and yearly income are still under review.

The actress has a well-maintained body figure of 5 feet 8 inches in height. Likely, her weight is around 58 kg. She has a gleaming face with a courteous smile. Further, she has beautiful hazel pair of eyes with dark brown hair color.