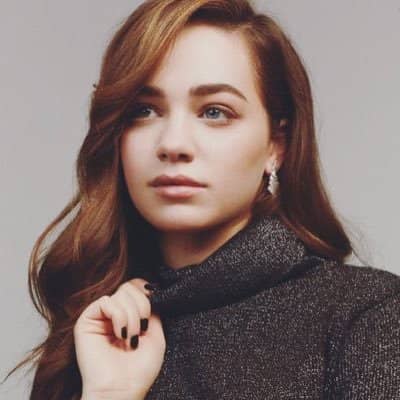 Mary Mouser is currently dating a guy. Her boyfriend’s name is Brett Pierce. He is also an actor and his Instagram account has over 16k followers.

They started dating in the year 2015 and often share their lovely pictures on social sites.

Who is Mary Mouser?

Mary Mouser is an American actress in both TV and films. She was seen playing Lacey Fleming on the series Body of Proof and this made her an eminent star.

Her latest TV show appearance was in Room 104 (2019) and she played the role of Adrianne/Lisa.

She was born as Mary Matilyn Mouser on 09 May 1996, in Pine Bluff, Arkansas, United States. The name of her father and her mother is Scott Mouser and Tina Mouser respectively.

She belongs of Caucasian descent. Her actor brother is Aaron Parker Mouser and her actress sister is Laura Ashley Mouser.

Regarding academics, she is homeschooled.

Mary Mouser is mostly known for her appearance in Cobra Kai. This series was first aired in 2018 till the present and she has played one of the main roles of Samantha LaRusso.

Mary also did short appearances in Scrubs, The King of Queens, A Stranger’s Heart, Maron, Freakish, Room 104, Scorpion, and many more.

She has an estimated net worth of $2 million as of the year 2021. But her salary and other earnings from her acting career are unknown.

This Body of Proof‘s star is keeping herself away from rumors and desperate scandals.

Regarding Mary Mouser’s body features, her height is 5 ft 3 inches and her body weight is 50 kg. Looking at her pictures, the color of her eyes is blue and her hair is also in light brown color.

Mary is available on social sites. She is popular on Instagram and has over 1.1m followers on it. Her Facebook and Twitter accounts are followed by over 483k and 37.1k people respectively.

In addition, Mary also runs a YouTube channel that was created on 14 June 2018. It has now more than 191k subscribers.

You may also like to read about Erica Rose (Actress), Natalia Cigliuti, and Emma Davies (actress).