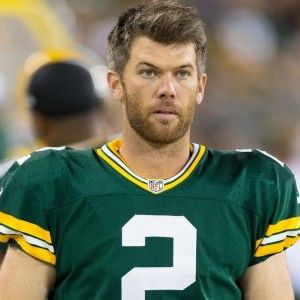 Talented Mason has been happily married to Molly Ackerman since June 28, 2008. They met in Glenwood High School and later on she was part of the cheerleading team for Mason’s football team

Who is Mason Crosby?

Mason Crosby is an American football player who plays as a placekicker for the football team Green Bay Packers of the National Football League (NFL).

He recently signed a new 4-year contract on March 1, 2016, with the Green Bay Packers. Mason broke Ryan Longwell’s team career scoring record of 1054 with his fourth field goal of the game against the Seattle Seahawks on September 20, 2015, and currently is also the all-time leading scorer in Packers’ history.

Texas-born Mason Crosby was born on September 3, 1984, as Mason Walker Crosby. He was interested in American football from a very young age. He was born to father Jim Crosby who played running back in his college days for UTEP Miners. His mother’s name is Karen Crosby. His sister’s name is Ashley Fraser and brother’s name is Rees Crosby.

Crosby joined the University of Colorado where he completed his education. He graduated from there in December 2006 with a degree in communication. He also attended Georgetown High School in Texas. Furthermore, he played football and soccer most of the time.

He was athletic from a young age and would play football and soccer most of the time which did lead him to be a professional American football player for sure.

Mason’s football career started from his early high school days. While his days at University of Colorado, he played for Colorado Buffaloes football team from 2003 to 2006 where he was mainly known for his strong leg-strength.

Mason was selected as a first-team All-big 12 in 2004, 2005, and 2006 and has been honored by first-team honors from the Associated Press, the Football Writers Association of America, The Sporting News, and Walter Camp Football Foundation. He also won the runner-up position for the Lou Groza Award.

He became Colorado’s all-time leading scorer with 308 career points. As per his professional football career, it started from 2011 season when he was resigned by Green Bay Packers with a 5-year, $14 million deal. He has been playing for the same team until now and has recently signed a new contract with them that keeps him with Packers until March 1, 2020.

He also broke a Green Bay Packers team record with a 58-yard field goal in 2011 and has also won Super Bowl XLV with teammate Aaron Rodgers in 2011 As per his new contract, he earns a massive salary of $4,025,000 per year and has an estimated net worth of $4.7 million.

Despite being in a famous sport where players are criticized and dragged into controversy often for their performances, he hasn’t been a part of any controversy. His solo focus towards football keeps him away from any other rumors.

He has a height of 6 feet 1 inches and weighs 94 kg. He has salt and pepper hair color and hazel eye color. His shoe size, dress size, body measurements etc. are unknown.