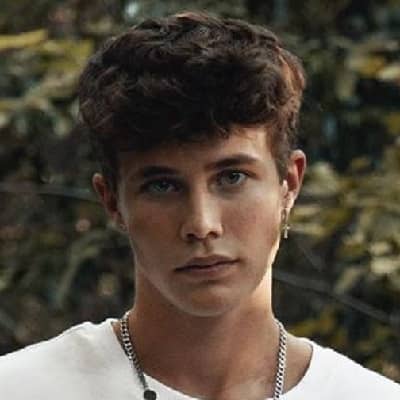 Mason Hilton has maintained a private life when it comes to his relationship status. He might be hiding his girlfriend from the media or might be single at present.

Nevertheless, his relationship status is unknown.

Who is Mason Hilton?

Mason Hilton is a social media personality and a Tik Tok star.

He came into the limelight after posting different dances, comedy clips, POV’s, and lip-syncs for his TikTok account themasonhilton.

Mason was born on May 11, 2001, in the United States of America. His birth name is Mason Ray Hilton. He holds an American nationality and belongs to Caucasian ethnic groups.

He was brought up in Indiana. Mason relocated to Texas with his family when he was 10 years old.

Yet being a rising TikTok star, there is not much information about Mason’s father, mother, and education.

Mason gained social-media fame after he started to post different videos on TikTok in 2019. His video content includes entertaining point-of-view (POV) videos, lip-sync clips, and dance videos. He is famous on the Tiktok gaining more than 28.8 million likes and over 1.3 million fans.

In addition, Mason is the co-founder of Top Talent Management, a talent agency based in Chattanooga, Tennessee, U.S.

Also, Mason is a football player and has also participated in many tournaments.

The star has amassed a net worth of around $200,000. The main source of his income is his TikTok videos. Regarding his post in TikTok, his earnings are in the range of $2K to $4.5K.

Mason’s name came into the Daddy Daughter POV scandal on TikTok.  There was a trend on TikTok recently in early 2020 where the viewer was supposed to be a daughter walking into her parents and catching them in compromising situations. Most viewers express their thought regarding it; where some thought the videos were offensive to victims of sexual abuse.

Many of Mason’s POV videos were also as per the trend and people started criticizing him. Many requested him to take his videos down. These videos were set to the song Dissolve by Absofactor, and the singer himself also urged TikTok content creators to take the videos down.

Later on, Mason including other TikTok stars such as Princexharvey removed their videos and apologized to their fans.

He has around 2M followers and has over 42M likes on his TikTok account. Furthermore, he has his own YouTube channel with 6.84K subscribers.

Also, get to know about Addison Rae, JR Stuber, Hooodjabi, and Undos.