Updated On December 18, 2022 | Published By: Claude Payton
Share this
Divorce 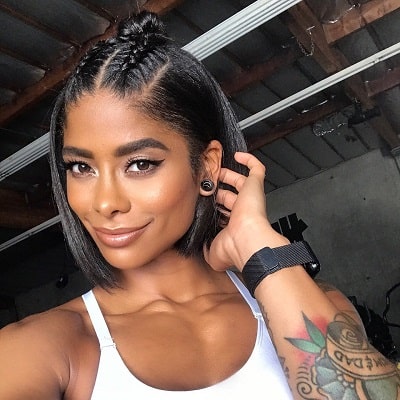 What is the relationship of Massy Arias?

Massy Arias at present is possibly single. But she was once a married woman.

She exchanged vows with Willy Beamen and with him welcomed their first child.

They named their daughter Indira Sarai who was born in 2017. But their relationship ended via a divorce. Massy hasn’t disclosed details about her wedding and split.

After this, she dated Stephan Williams with whom she broke up in July 2020.

Who is Massy Arias?

Massy Arias is a Dominican Personal trainer, motivator, and activist. She is famous for gracing the front of a few magazines including the American way of life magazine Latina.

She was born on November 23, 1988, in Santo Domingo, Dominican Republic.

Massy Arias was born to a nurse practitioner mother and auto repair shop owner father. Massy Arias grew up along with five of her brothers. When she was 13 years old, her father and two elder brothers moved to the USA.

Massy holds Dominican citizenship and her ethnicity is Caucasian.

In which school did Massy Arias attend?

She attended nursing school in order to pursue a career as a forensic pathologist. In her initial year at Queens College, her brother was diagnosed with Burkitt lymphoma, a type of cancer.

She struggled with staying in turns with her mother for her bedridden brother in hospital accompanied by part-time jobs and college assignments.

Her father retired and insisted Massy Arias move her to her hometown Dominican Republic when she was 19 years old. But, she did not agree as she wished to continue nursing school and tangled in full-time jobs and abusive relationships to pay off the bills.

Her grades fell back, so didn’t even apply to clinical programs and later, she managed to establish the halo of the influencer in the fitness approach.

Massy Arias was not interested in fitness at first as she ended up in a myriad of depression when she could not pay bills for her nursing school.

Simultaneously, she experienced misleading and provocation from an ex-boyfriend and could not continue her work at Levi as assistant manager and eventually left the job.

However, she confronted her father that she was fired from her job. Later her father agreed to support her financially for a certain period.

In the midst of that time, Arias propelled herself into the darker shades and lost appetite, hair, and even refused to take a shower.

Fortunately, one of her friends persuaded her to take gym classes. Then she cherished taking part in exercise plans and felt the change in her internal just as an external side.

From that point onward, she made the Instagram account in 2012 and started transferring her endeavor to level muscles abs.

She didn’t claim a guaranteed health specialist tag, individuals in a split second reached Massy Arias for the exercise session and she charged $400 for the 12 sessions.

It seems Massy has not been awarded and nominated for her work to date.

She has an estimated net worth of around  $1 million.

Her brand Tru Supplements is gradually getting a bigger market and in a couple of years. Further, her net worth is speculated to hit millionaire status.

Massy has been successful in keeping herself far from rumors and controversies in her personal and professional life.

What are the body measurements of Massy Arias?

Massy Arias stands at a height of 5 ft. 9 inches. She has black hair and black eyes with a weight of 63 kg.

But, other information about her body measurement is 36-24-36 inches.

What is Massy Arias known for?

Who was Massy's first husband?