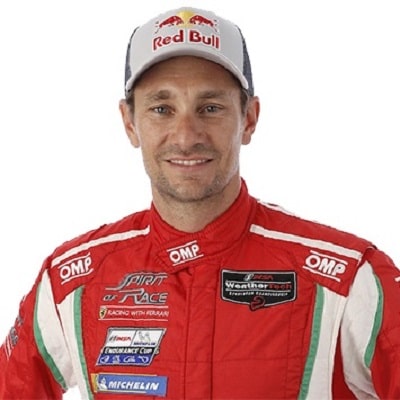 Florida NASCAR is pure racing without politics, fans always look for heroes connecting with the driver ahead of the car.

Mathias Lauda is a married person. He began dating Claire Lauda before 2013 and soon married his longtime girlfriend. The couple is blessed with two sons: Lenny Lauda born on February 12, 2014, and Ellison Lauda on June 7, 2016. The family is currently living together and they are sharing quality time with each other.

Who is Mathias Lauda?

Mathias Lauda is an Austrian race car driver who currently races for Aston Martin Racing as a factory driver in the FIA World Endurance Championship.

He was born on 30 January 1981 in Salzburg, Austria. His father’s name was Niki Lauda, a three-time Formula One world champion and his mother’s name is Marlene Knaus, a model, socialite, and fashion icon. He has a sibling, older brother Lukas Lauda, born in 1979.

Lukas words as his manager and his father Niki Lauda passed away on 20 May 2019.

Mathias holds Austrian citizenship but his ethnicity is European.

Talking about Lauda’s education history, he has not disclosed any information about the educational institution’s names he attended.

He started his career in 2002 and made his debut in Formula Nissan 2000 and drove in two races of German Formula VW and one race of Spanish Formula Three the same year. In 2003 he raced in  World Series Light in 2003 and was raced in  Euro 2000 Series,  Formula 3000 with the Coloni Motorsport team in 2004.

Later, he raced in 2005 GP2 Series, 2005-06 A1 Grand Prix season by the following year but as he had not achieved any major results, he decided to switch to touring cars.

He must have accumulated a huge sum of money from his career however, he has not revealed his exact net worth, salary, and income. His father has accumulated more than $100 million net worth.

Lauda has been successful in keeping himself far from rumors and controversies in his personal and professional life.

He has blue eyes and light brown hair. But, information about his height, weight, shoe size, dress size, etc. are not available.