Who is Matilda De Angelis Dating?

Reflecting on the personal life of actress Matilda De Angelis, She is currently engaged to her fiance William Mezzanotte aka Nayt. He is an Italian rapper.

They started dating around 2021 and got engaged within a short time of togetherness. They are able to maintain low-key romance. They shot for the movie ‘Robbing Musolini’ in Venice, Italy.

Previously, this singer dated Andrea Aracngeli, an Italian actor from 2017 to 2020. Later, they broke up but the reason behind their separation has not been publicized yet.

The duo had shared the screen in the ‘Rumori’ a short drama. 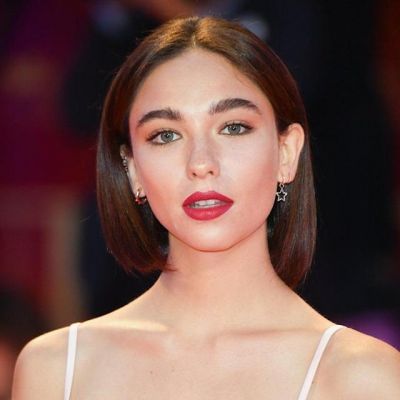 Who is Matilda De Angelis?

Matilda De Angelis is a rising actress, and singer hailing from Italy. She has appeared in the movies like ‘Italian Race’ and ‘Roseland’ while her tv series credits include, ‘The Undoing'(2020) and (Leonardo) in 2021.

Currently, the actress is in the limelight after the premiere of the 2022 movie, ‘Across the River and into the Trees’  in which she has appeared.

Matilda De Angelis was born in the Bologna, Emilia-Romagna, Italy on 11 September 1995. De Angelis is 26 years old as of 2022 holding the Italian nationality. She is of European ethnicity having a Virgo birth zodiac sign.

Her father Lorenzo de Angelis, is a graphic designer while her mother, Tania Troilo is an insurer. She has a brother named, Tobia De Angelis who is an oboe player, short story writer, budding chef, and actor. In the television series, ‘ Tutto può succedere’ her brother has played the role of her character’s brother as Denis.

However, she went to Liceo Scientifico to complete her schooling.

The actress was passionate about music from a young age and began to play guitar and violin when she was only thirteen years old. Firstly, she sang in the band Rumba de Bodas in 2011. In 2014, they released their album, ‘Karnaval Fou.’

She was able to steal the attention of the director, Matteo Rovere, after which she got a chance to be cast in the lead role in his movie, ‘Italian Race’ in 2016. She got in a nomination for 2017 David di Donatello in the category of Best Actress for her debut role in the following movie.

As a singer and songwriter, he sang the song, ‘Seventeen’ for the movie, for which she was nominated at the same competition for Best Original Song. In addition, she received Flainao Prizes and Nastro d’argento as the Best Newcomer.

In Alessandro Gassmann’s comedy movie, ‘The Prize’ she portrayed the role of Britta. She then starred as a teenage girl who sold her virginity online in order to protect her family in the 2018 drama film, ‘Youtopia.’

Then, in 2020, she landed as Elena Alves in the thriller miniseries, ‘The Undoing’ which is the adaptation of Jean Hanff Korelitz’s 2014 novel, ‘You Should Have Known.’ In the same year, she came up with an interesting role as Gabriella in Sydney Sibilia’s comedy-drama film, ‘Rose Island.’ The movie earned her David di Donatello for Best Supporting Actress.

The star served as a co-host alongside Amadeus in the Sanremo Festival 2021.

Her most recent project is Ernest Hemingway’s novel ‘Across the River and into the Trees’ based movie, with the same title as the novel. She has the screen with other stars like Liev Schreiber, Danny Huston, Laura Morante, and Josh Hutcherson. On March 30, 2022, the movie premiered at the Sun Valley Film Festival.

The singer has an estimated net worth that ranges between 1 to 5 million USD. Matilda De Angelis has not mentioned her yearly/monthly salary yet.

The cast of ‘Leonardo’ is keeping herself out of the rumors and controversies. There are no instances where any questions regarding her image were raised.

Matilda De Angelis stands at the height of 5 feet 5.25 inches weighing around 52 Kg.

Moving toward her physical appearance, with a fair complexion, the actress has light brown hair and eyes of the same color as well.

Matilda De Angelis is present on Instagram under the username, @matildadeangelis having more than 648K followers.

Also, there is an official Facebook page under her name that has garnered over 48Kfollowers.

Additionally, there is an unverified Twitter account with her name, which is enriched with a few followers.