British singer-songwriter Matt Bellamy is married and a father of one. 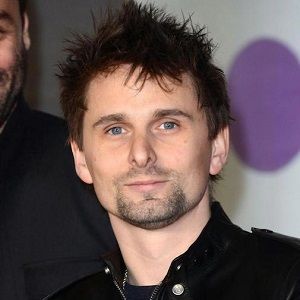 "I try to play squash but I keep running into the walls." “As soon as you pick up a guitar, you’re up against the legends of rock.” “We always like to find out what the latest pyro is.”

The 43-year-old British singer and guitarist, Matt is married Elle Evans on 10th August 2019. Since 2015, Matt began dating American model Elle Evans. After two years of their relationship, the lovebirds engaged in December 2017. Currently, Matt and Elle are enjoying their life and living beautifully.

Previously, he was engaged with an Italian psychologist named Gaia Polloni in 2001.

The couple continued their relationship for almost eight years and ended up in 2009. Back in 2010, Matt began going out with Kate Hudson.

Together, the couple also welcomed a son Bingham Hawn Bellamy. Although, they called it quit after being in a relationship for four years.

Who is Matt Bellamy?

So far, the band has sold more than 20 million albums worldwide. Furthermore, Muse has received a massive number of awards such as two Grammy Awards, two Brit Awards, five MTV Europe Music Awards, and much more.

Additionally, Matt got huge recognition for songs like Madness, Resistance, Starlight, and Uprising.

Matt was born on 9 June 1978, in Cambridge, United Kingdom. As of 2021, He is 43 years old. He is the son of George Bellamy and Marilyn Bellamy. Talking about his nationality, he is British and his ethnicity is mixed.

At the age of 12, he played his first recital at Teignmouth Community College. As a child, his childhood was not so easy after his parents separated and he grew up along with his brother Paul by his mother.

Moreover, his father was a guitarist for a popular band called The Tornadoes.

Matt began his music career in his teens when he played with the band Gothic Plague. Later, they changed the name of their band and renamed it Rocket Baby Dolls. Finally, they decided to name the band Muse. In May 1998, they released their first self-titled Extended Play. Although, it couldn’t become a huge success.

Soon after that, Muse released the second Extended Play named Muscle Museum. As a result, many publications showed their interest to sign the Band. Later, Muse signed a deal with the record label Maverick Records and released their debut album Showbiz. It also climbed at No. 29 on the UK Albums Chart.

After a couple of years, Matt’s second album Origin of Symmetry became a huge hit and reached the third position on the UK Albums Chart. Moreover, it also entered the US Billboard 200 in No. 161. Matt rose to fame after he launched Absolution which became a huge success.

Additionally, it also peaked at the first position on the UK Albums Chart. Furthermore, his other major works include Black Holes and Revelations, The Resistance, The 2nd Law, Drones, and a few more. In addition, some of the several single hits consist, Madness, Survival, Follow Me, Starlight, and Uprising.

Being a successful musician, he pockets a huge amount of money from his profession. Currently, he has a net worth of $40 million.

So far, there are not any drastic rumors regarding his personal and professional life. Furthermore, he has never faced any controversy in his career to date. It seems he has a total focus on his career rather than being stuck in any controversy.

Matt has a height of 5 ft 7 inches and weighs 66 kg. Furthermore, he has a pair of blue eyes and brown hair. Besides this, there is not any information regarding his body measurements.

Single Mother Kate Hudson Showing off her rock hard body in Hot Pink Bikini…Enjoying her Vacation with family in Hawaii!!!