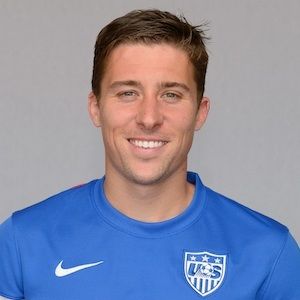 Matt Besler is a married man. He exchanged vows with his girlfriend Amanda Miller Besler back in 2013. They have already welcomed a daughter named Parker Rhea Besler in September 2016.

They have pretty adorable bonding with each other. Matt has never been a rumor with any extra relationship yet. Both of them have managed to keep their relationship healthy.

Who is Matt Besler?

Matt Besler is a professional American soccer player. Presently, he plays for Sporting Kansas City as a central defender.

He was born as Matthew Scott Besler on February 11, 1987, in Overland Park, Kansas, the U.S. His father’s name is Greg and his mother’s name is Diane.

His ethnicity is Catholic and has two brothers Nick Besler and Mike Besler.

Talking about his education, Matt completed his high school from Blue Valley West High School. Later he enrolled at the University of Notre Dame and accomplished his graduation.

In his youth career, Matt Besler has led his team Blue Valley West to the state championship. He netted 23 goals and provided 19 assists for his team.

Matt has also played for college-level soccer from which he started to gain fame. Later, he moved to Kansas City Wizards and made debuted in March 2009. Matt scored his first goal where he played against Chicago fire on March 26, 2011.

Matt has got an offer from Southampton and Birmingham City but he remained at Kansas City. His first appearance for the senior side was on January 29, 2013, in a friendly match against Canada. Furthermore, he was also a member of the squad when the United States defeated Germany  4-3 in an International Friendly.

Matt got selected in the 23 men squad for the 2014 FIFA World Cup and start in all group matches. After his brilliant performance in the World Cup, many clubs made an offer for him but he rejected all of them and stayed at Kansas City.

He has received many awards and honored at various events. Matt was named MLS Defender of the Year as well as MLS Breakout Player of the Year in 2012. He was also titled as MLS All-Star in 2011 and in 2013 to 2015.

This sportsperson’s estimated net worth is $500 thousand. He is earning a handsome amount of salary of $91,751 annually.

As per the sources, a soccer player receives an average salary of around $860k per year.

Matt transfer rumor to another club was at its peak after the 2014 world cup. But he refused to leave his club and signed another contract with Kansas City.

So far, he has pulled himself out from any controversy. His dedication towards his profession is too high that he didn’t even face any problems.

Matt Besler has a perfect height of 6 ft and weighs 77 kg. He looks adorable with his hazel blue eyes and brown hair.

Matt is active on social networking sites and has around 41.2k followers on Instagram.