Matt Fraser is an American psychic medium, author, and television personality. He is married to Alexa Papigiotis.

Matt Fraser recently married to longtime girlfriend, Alexa Papigiotis. Alexa is a model and tv personality by profession. She also won the title of Miss Rhode Island Teen USA in 2017.

After five years of relationship, the couple tied the knot on the 9th of October 2021 in an intimate ceremony in Plam Beach, Florida. They first met in January 2017 and got engaged in May 2019. 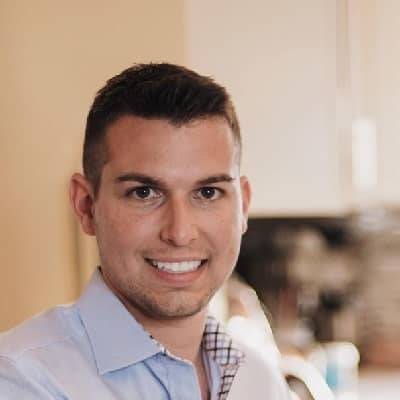 Who is Matt Fraser?

Matt Fraser is an American psychic medium, author, and television personality. He is best known for Meet the Frasers, Mediumship, and psychic prediction.

Matt’s full name is Matthew L. Fraser. The name of his parents is Rod Fraser (father) and Angela (mother). He has a sister named Maria Fraser. Also, his academics background is under the curtains at the moment.

He holds an American nationality whereas his ethnicity is unknown.

Matt earlier worked as an Emergency Medical Technician. He also trained as a paramedic and physician assistant. He has worked with local police and private investigators on cold cases, in which he helped families locate their missing children. Throughout his career, he has conducted thousands of readings for clients around the world.

In January 2020, Matt created a reality television series, Meet the Frasers that premieres on January 13, 2020, aired on E!. The series chronicles the lives of Fraser and his family, including his fiance Alexa Papigiotis. Aside from this, Matt has published two books named Fraser, Matt (2013) and Fraser, Matt (2020).

Matt stays miles away from any sorts of rumors and controversy that creates a huge buzz in the media. To date, he has managed to maintain a  clean profile.

Matt might have accumulated an impressive amount of fortune throughout his profession. However, he hasn’t yet disclosed his exact net worth, salary, and other earnings in the media.

Talking about Matt’s physical appearance, he has a fair complexion. Likewise, he has a dark brown pair of eyes and dark brown hair color.