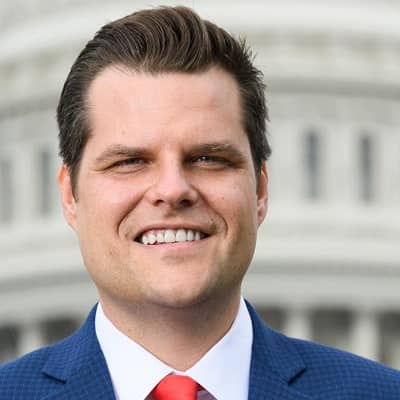 Matt Gaetz is in a love relationship with his girlfriend, Ginger Luckey. The couple engaged in December 2020.

Moreover, Ginger is the sister of Palmer Luckey, founder of Oculus VR and major Republican donor.

It is reported that Matt has an adopted son as well named Nestor Galban. Galban was just 12 when Gaetz adopted him.

At the time, the young boy had just arrived from Cuba. His mother had recently passed away because of breast cancer. Gaetz confirmed it via Twitter.

Who is Matt Gaetz?

Matthew Louis Gaetz II, famed as Matt Gaetz is a well-recognized American Lawyer as well as Republican politician. Gaetz has been active in serving as the U.S. representative for Florida’s 1st congressional district since 2017.

Also, he was elected to Congress at the time of the 2016 elections.

Matt Gaetz was born on 7 May 1982. At present, his age is 38 years old. Likewise, his birthplace is Hollywood, Florida, the USA. Gaetz’s birth name is Matthew Lous Gaetz II.

Matt is the son of his father, Don Gaetz whereas his mother is Victoria Quertermous. Professionally his dad is also a Republican politician who worked as a member of the Florida State Senate for 10 years. Moreover, he has a younger sister as well named Erin Gaetz.

Talking about his nationality, Matt holds an American identity whereas his ethnicity is Caucasian. Also, he follows the Baptist religion.

The Lawyer took her graduation degree from Florida State University in the year 2003 in interdisciplinary sciences. Moreover, he earned a J.D. from the William & Mary Law School in 2007.

After his graduation, Matt Gaetz received his JD from the College of William & Mary. He then started working for a law firm in Fort Walton, Beach. Later, he started working as a member of the Florida House of Representatives from the 4th district from April 2010 to November 2016.

Gaetz started serving to be a member of the U.S. House of Representatives from Florida’s 1st district in January 2017. In his working period, Matt covered much of the Florida Panhandle which consists of Pensacola and his home of Fort Walton beach.

Furthermore, Matt served as an attorney in Fort Walton Beach, Florida as well. He has been appointed as the chairman of the Criminal Justice Subcommittee as well.

Matt was ranked as a member of the moderate Republican Main Street Partnership in the year 2017 and also cast his vote in support of the Tac Cuts and Jobs Act. He was the one who introduced legislation to reschedule cannabis from a Schedule I to a Schedule III drug.

The attorney is one of the big promoters as well as defender of then-President Donald Trump for a long time. He also promoted President Trump’s decision to admit Jerusalem as Israel’s capital in December 2017.

In November 2019, He voted for the Marijuana Opportunity Reinvestment and Expungement (MORE) act becoming one of the only two Republicans on the House Judiciary Committee to favor it.

Matt has earned handsome income from his professional career being a politician and also a Lawyer.

It is reported that Matt Gaetz has an estimated net worth of $700 thousand. Moreover, his dad has a massive net worth of $30 million.

However, the Lawyer has not disclosed his exact salary, earnings, and assets details till now.

The well-named personality, Matt Gaetz has been part of any controversial matter.

In the year 2008, Matt was caught for driving under the effect at the time of returning from a nightclub on Okaloosa Island, Florida.

At first, the Lawyer insisted on the drinking claim however, he failed two field sobriety tests. Afterward, the charges were eventually dropped.

As per The Scripps Florida Investigative Team, between 1999 and 2014, Matt got 16 speeding tickets in Florida.

Also, he has been the victim of bad tweets on Twitter. On 1 June 2020, at the time of nationwide George Floyd protests, some of Gaetz’s tweets were hidden by Twitter and labeled as violating the Twitter Rules about glorifying violence.

Freshly, he has been investigated by the Justice Department for suspect of keeping sexual affair with a 17-year-old and paid for her to travel with him. Nevertheless, the attorney denied and claimed it as false sex allegations.

Popular Lawyer, Matt Gaetz has handsome looks as well as stands at a height of 5 feet 7 inches. Also, he has a balanced bodyweight of 72 kg.

Furthermore, Gaetz has black eyes whereas his hair is brown. He wears a shoe size of 6 (US).

Nevertheless, Matt has never mentioned other physical details in the public yet.

About his social media presence, Matt Gaetz is an active personality on social media. Gaetz has more than 1.2 million followers on his official Twitter account @repMattGaetz. He is also active on Instagram with around 548k followers.

Moreover, Matt is also available on Facebook with nearly 165k fans and supporters.