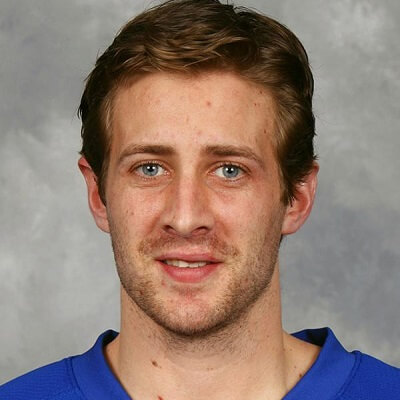 Matt Gilroy is a married man. He is married to Jenny Taft. She is an American sports TV personality who served as the moderator on Fox Sports 1’s Skip and Shannon: Undisputed. Additionally, she also works as a lead college football sideline reporter on Fox Sports 1 broadcasts.

The couple dated for around 5 years before deciding to get married. They exchanged wedding vows on 5 June 2016. So far, the couple looks satisfied with their marriage and have been married for over 4 years without any rumors of separation.

Who is Matt Gilroy?

Matt Gilroy is an American professional ice hockey player. He plays as a defenseman for the SC Rapperswil-Jona Lakers of the National League.

Matt Gilroy was born as Matthew J Gilroy on July 20, 1984, in North Bellmore, New York, US. As of 2020, his age is 35. He was born to parents Frank Gilroy (father) and Peggy Ann Gilroy(mother). His father, Frank is a member of St. John’s Basketball Hall of Fame and was drafted by the Philadelphia 76ers.  He is one of his parents’ eight children.

Matt wears the number 97 as a tribute to his deceased brother Timmy who sadly passed away to a bicycle accident when he was eight years old. Matt played together with Timmy on the same hockey teams growing up. His older brother, Frank Jr., played basketball representing St. Mary’s High School and St. Anselm College. His younger brother, Kevin played for the Terriers for their 2009 championship year. His ethnicity is Caucasian.

Talking about his educational background, he went to St. Mary’s High School in Manhasset from where he graduated in 2003. He captained the school hockey team to two New York state championships. In addition to this, he played lacrosse at St. Mary’s.

After graduating, he joined Boston University where he played NCAA hockey.

Matt Gilroy played NCAA hockey with Boston University of the Hockey East conference. There, he became a Hobey Baker Award winner and NCAA champion with the Boston Terriers in his senior year.

On April 17, 2009, he signed a two-year, $3.5-million contract with the New York Rangers of the National Hockey League. As a free agent, he signed a one-year contract with the Tampa Bay Lightning on July 2, 2011. On February 27, 2012, during the 2011–12 season, the Lightning traded him to the Ottawa Senators in exchange for Brian Lee at the NHL trade deadline.

The Rangers released him to free agency in the off-season and, on July 8, 2013, he signed a one-year contract with the Florida Panthers. In the 2013–14 season, he made just 16 appearances on the struggling Panthers side before assigning to the San Antonio Rampage, for the remainder of the season.

He signed his first European contract with the Russian club Atlant Moscow Oblast on June 25, 2014. After a year with Atlant, he signed with Spartak Moscow.

As a free agent, he signed a one-year deal with Swiss club, SC Rapperswil-Jona Lakers on May 15, 2018.

Gilroy stands at a height of 6 feet 1 inch and weighs around 91 kg. His hair color is brown and he has blue eyes.

Matt has not been involved in any controversies. He has been able to keep himself away from any type of controversy and scandal. So far, he has not done anything controversial in his career. Similarly, there are no rumors about him of any kind.

You may also like to read the Bio, Career, Body Measurements, Net Worth, Social Media, Relationships, and more about Nate Thompson, Tyler Motte, Alex DeBrincat, and more.