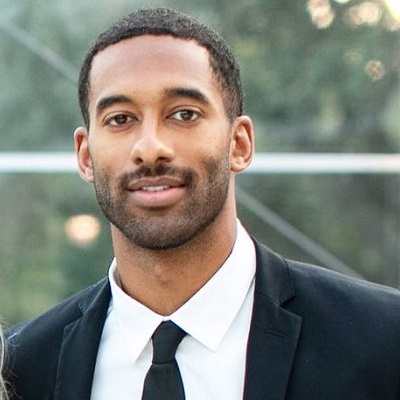 Matt James is currently single. To date, he has not introduced anybody as his girlfriend.

As of now, he is participating in the 25th season of The Bachelor to find the love of his life.

Who is Matt James?

American Matt James is a real estate broker and TV Personality. James is renowned as the first Black Bachelor lead of The Bachelor.

Matt James was born on 5th December 1991 in Raleigh, North Carolina. He is of All-American ethnicity with Caucasian roots.

He happens to be the son of Manny and Patty James. While growing up, his mother, Patty was the one who raised him. Patty goes with the handle, pjames61 on Instagram. She celebrates her birthdate on 27th March. On the occasion of fathers day, Matt shared a picture of his mother via Instagram.

Talking about his academics, he completed his High School education at Sanderson High School. Later, he joined Wake Forest University. From the University, he earned a bachelor’s degree with Honors in Economics. During his University days, he used to play football for his college team, Wake Forest Demon Deacons Football Team.

After graduating from the University, he joined the PNC Bank in Pittsburgh, Pennsylvania. Later, he joined the American Commercial Real Estate and Investment firm, CBRE Group which happens to the largest commercial real estate services company in the world. Currently, he is working for the company as a broker.

Besides being a real estate broker, he is also a philanthropist. He founded the non-profit organization, ABC Food Tours. It educates the unprivileged children and serves food and exercise in New York City.

Journey to The Bachelor

His Best friend, Tyler Cameron‘s mother, Andrea Cameron signed him to be a contestant of The Bachelorette before her death. However, due to the COVID-19 pandemic, he was selected as the next Bachelor for The Bachelor.

As of 2021, he has an estimated net worth of $700 Thousand. His salary as a commercial real estate broker is in the range of $73k or above.

The charming Bachelor, Matt has brown eyes with black hair. He stands at a height of 6 feet and 5 inches and weighs around 100 kg.

He has a charismatic persona with an oval-shaped facial feature. Also, he prefers to have slightly grown facial hair.

You may also read the bio, age, parents, ethnicity, siblings, and social media of Charli D’Amelio, Patrick Starrr, and Willywonkatiktok.