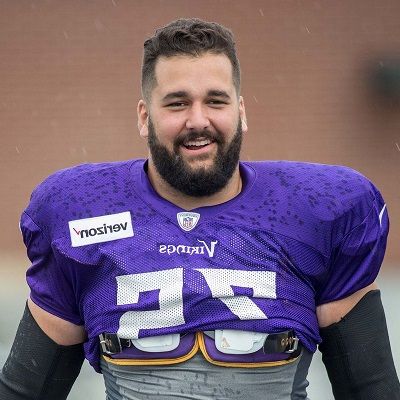 Matt Kalil married in a secret ceremony with Haley O’Brian. The wedding took place on July 8, 2015, on a private beach in Kauai.

Then on July 8, 2016, a formal ceremony was arranged for family and friends. The function was held at JJ Hill Center whereas reception was done at Landmark Center, Minnesota.

Who is Matt Kalil?

Matt Kalil is an American sportsperson. He is a football player who plays as an offensive tackle.

His mother’s and father’s names are Cheryl Kalil and Frank Kalil. Mr. Frank used to play a center in Arkansas and Arizona.

Regarding siblings’, he has a brother Ryan Kalil who is also a football player and a sister Danielle Kalil.

Regarding his academics information, he attended Servite High School, California. For college studies, he joined USC.

Matt Kalil is a popular face of the sports industry. He started to play football in high school as well as in college days.

Then after seeing is amazing playing styles, Matt was signed by Minnesota Vikings in July 2012. But he got a hip injury in Sep 2016.

After this, Matt signed a contract with Caroline Panthers on March 10, 2017. It was a five years contract with an amount of $55 million. He was released in March 2019.

Matt has won many awards and titles through his playing style. He was a Pro Bowl and PFWA All-Rookie Team in 2012.

Moreover, in 2011 he has won Morris Trophy and was First-Team All-American and All-Pac-12.

Matt Kalil is an excellent player who has won the hearts of the public through his acts. However, this star has not been in any controversies or rumors.

This sportsman has an estimated net worth of $300 thousand.

His contract with Houston Texans was fixed with $3.25 million as a base salary plus a bonus of $2 million.

Regarding Matt Kalil’s body features, he has dark brown eyes and dark brown hair. His height is 6 ft 7 inches and weight is 143 kg.