Matt LaFleur is married to Breanne LaFleur. Breanne worked as a pharmaceutical seller however she later quit her job.

The couple first met at Central Michigan University in the year 2014. However, the beautiful couple hasn’t shared their marriage date and love life in the media. They have two sons named Luke Matt LaFleur and Ty. Matt LaFleur. 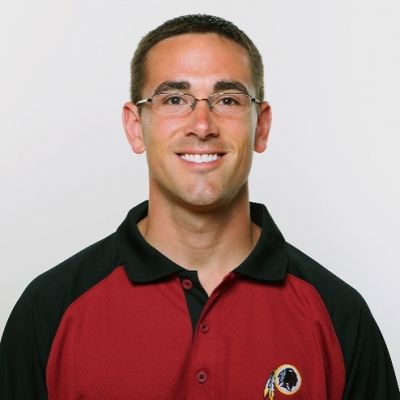 Who is Matt LaFleur?

Matt LaFleur is a football coach from the United States. Currently, he is the head coach for the Green Bay Packers of the National Football League (NFL).

Matt was born on the 3rd of November 1979, in Mount Pleasant, Michigan. His full name is Matthew Patrick LaFleur.

The name of his parents is Denny LaFleur (father) and Kristi LaFleur (mother). His father was also a coach who played linebacker for Central Michigan. At present, he served as a coach in Mt. Pleasant, Michigan since 1998.

Similarly, his mother, Kristi is a cheerleader. He has also a sibling named Mike LaFleur (younger brother). Mike serves as a passing game coordinator for the San Francisco 49ers of the NFL.

Further, he holds an American nationality whereas he belongs to Caucasian descent.

Talking about his academic background, he attended Mount Pleasant High School in Michigan. He then went to Western Michigan University in Kalamazoo where he played as wide receiver in 1998 and 1999.

Afterward, he transferred to Saginaw Valley State in Division II where he played as a quarterback from 2000 to 2002.

On January 8, 2019, LaFleur was hired as the head coach of the Green Bay Packers on a four-year contract that includes a fifth-year club option. LaFleur also led the Packers and became the first Green Bay coach to win his first game against the Bears since Vince Lombardi in 1959.

Matt stays miles away from any sorts of rumors and controversy that create a huge buzz in the media. He has a clean profile to date.

Matt has amassed a handsome amount of fortune throughout his coaching career. As of 2022, he has an estimated net worth of $7 million.

Similarly, his salary is estimated in the range between $5 million and $5.5 million per year according to two league sources.

The coach has an impressive height of 5 feet 11 inches. Likewise, his weight is about 84 kg. He has a dark brown pair of eyes and black hair.

However, he doesn’t available onFacebook.