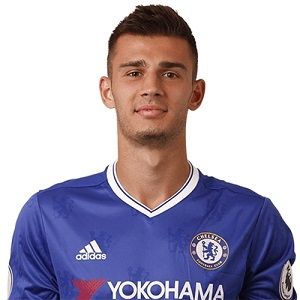 Tall and handsome Matt Miazga is in a relationship. He is dating Victoria Vail since 2012. This love birds regularly posts their photos on social media.

Who is Matt Miazga?

Matt Miazga is an American professional soccer player. He represents the United States at the international matches. Currently, he plays for Vitesse as a defender. Before starting his professional career he played for New York Red Bulls as a youth. Matt has also played in the Poland U18. He signed with Chelsea in 2016.

Matt Miazga was born to Adam and Eliżabeth on July 19, 1995, in Clifton, New Jersey, United States. His parents are from Poland. He has a younger brother Thomas and a sister Monika.

From the beginning of his childhood, he had a keen interest in soccer. As a young boy, he started to play soccer in his hometown. His nationality is American and ethnicity is Polish.

Talking about his education, Matt joined Clifton High School. But just after one year he left to concentrate on soccer.

Matt began his career in a youth team, New York Red Bulls. He played there for four seasons from 2009-2013. He became a homegrown player of New York Red Bulls signing a contract on May 30, 2013. Furthermore, Matt became one of the best defenders the club has ever produced.

After his three seasons with New York Red Bulls, he got an offer from Premier League club Chelsea. He agreed to join Chelsea on January 30, 2016, for a fee of $5 million. Just after a couple of months, Matt made his Chelsea debut against Aston Villa on April 2, 2016.

Matt Miazga switched to Vitesse on August 31, 2016, on a loan. he netted his first goal against Jodan Boys. After a season at Vitesse, his contract was extended to for another season. As a national team boy, he has played in the U14, U18, U20, and U23. Miazga gained his first senior call up against Saint Vincent and the Grenadines on November 13, 2015. He has scored a goal in the 2017 CONCACAF Gold Cup in a victory over Nicaragua under the captainship of Michael Bradley.

In such a young age, Matt has earned many awards and honors in his career. He was the member of the team when New York Red Bulls won Supporters’ Shield twice. Furthermore, Matt has also lifted the 2016-17 KNVB Cup with Vitesse.

Recently he was in the squad, as the United States national team won the Gold Cup. He is one of the vital members of the squad alongside Jordan Morris, Kellyn Acosta, and Jozy Altidore.

Matt is earning a healthy amount of money from his soccer career. As per his income, he is worth millions of dollars. However, there isn’t exact information regarding his net worth.

Currently, there are no desperate rumors regarding his personal and professional life. Matt has managed to put himself out from any controversy. So far, he has not been in any controversy yet.