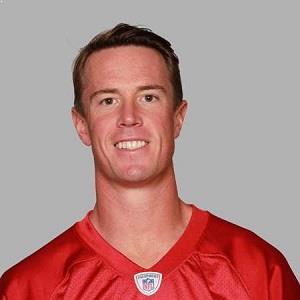 I've always been of the belief that if you prepare well, you can go out there and play your game.

You find a balance between preparing for football and finding time to rest and take care of the things you need to lead a normal life.

must hide my emotions pretty well, because I get fired up before the games. I get anxious every week. It doesn't change.

way from football, I'm happiest just spending time with my family and friends. They're some of the few people who don't ask you about football all the time, and that's nice.

What is the relationship of Matt Ryan?

Matt Ryan is a married man. He married Sarah Marshall in April 2011. There is no further information regarding the marriage.

At present, the marriage seems stable and is going strong as no news regarding any extramarital affairs is known. On November 21, 2017, Ryan announced on social media that he and his wife Sarah are expecting twins.

Who is Matt Ryan?

Matt Ryan is an American football quarterback for the Atlanta Falcons of the National Football League (NFL). Previously, he played college football at Boston College.

Later, he became drafted by the Falcons with the third overall pick in the first round of the 2008 NFL Draft.

Ryan was born in Exton, West Whiteland Township, Pennsylvania on May 17, 1985, as the third of four siblings, was born to Bernice and Michael Ryan. He is 36 years old.

One of his uncles, John Loughery, played quarterback at Boston College from 1979-82. He became interested in the world of football in his childhood years. He is of American nationality. Furthermore, he belongs to Irish ethnic background.

Talking about his education, Ryan attended William Penn Charter School. Later, he attended Boston College in 2003 and redshirted his first year with the team.

Initially, Ryan0020was a three-year starter and earned All-East honors from Larunt Lemming Prep Football Report. Additionally, before the 2004 season, he was named the starting quarterback for Boston College due to an injury to Quinton Porter.

He made his collegiate debut on October 2, 2004, against the UMass Minutemen and completed two of three passes for 16 yards. Additionally, he was named the second-string quarterback behind Quinton Porter in the 2005 season. In the 2006 season, he started 11 of the 12 games and completed 254-of-398 passes for 2,700 yards, 17 touchdowns, and eight interceptions.

Talking about his professional career, Ryan scored a 32 on the Wonderlic exam, tying Louisville’s Brian Brohm for the highest score by a quarterback in the 2008 Draft class. Eventually, he was drafted third overall by the Atlanta Falcons in the 2008 NFL Draft.

On August 24, 2008, Ryan was named the starting quarterback for the September 7 regular-season opener against the Detroit Lions. Most recently, Ryan connected with tight end Austin Hooper for an 88-yard touchdown on September 10, 2017, in the season-opening 23–17 victory.

Ryan has a salary of $11,500,000 from the Atlanta Falcons. Furthermore, he has an estimated net worth of around $70 Million.

Ryan became part of controversy due to the Falcons win after the wide receiver Golden Tate’s potential game-winning touchdown was ruled short of the goal line and a 10-second runoff awarded the win to Atlanta. The finish was termed controversial. Additionally, he also became part of another controversy as he was rumored to be taunted by Suh and Avril of Detroit Lions.

Ryan has a height of 6 ft. 4 inches. Additionally, he weighs 98 kg. Furthermore, his hair color is light brown and eye color is dark brown.