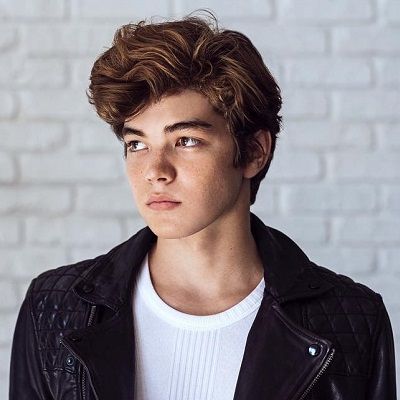 Matt Sato has already found love. His girlfriend is non-other than the actress, Tori Keeth.

They started dating in 2019. Till the date, the actors have not shared any details on their dating life. Currently, the lovebirds are enjoying each other’s company.

Who is Matt Sato?

American Matt Sato is a TV actor and a singer. He is renowned as Jason of the series, Save Me.

Last, in 2020, he appeared in the TV series, Chicken Girls as Robby.

Next, he will appear in the movie, Patsy Lee & The Keepers of the 5 Kingdoms as Hopper. Currently, the movie is in the stage of being post-produced.

Matt Sato was born on the 19th of April 2001 in Hawaii, United States. His real name is Matthew Satto. He is of British-Irish ethnicity.

As of now, he has not shared any details on his family background including his father, and mother. He is the youngest among his four siblings including three brothers; Gavin, Brandon, and Mark and a sister, Ashley.

He completed his High School from the private school, American Renaissance Academy in Hawaii.

Back in 2015, Matt Sato started his career as an actor with the TV series, Hawaii Five-0. After the series, he took a short break from the entertainment industry.

In 2018, he came back in the industry with a short movie, Ghosts. The same year, he appeared in the series, Piperazzi too. However, his role was too short and limited to an episode only.

Later, he made appeared in the web series, Chicken Girls as Robby. The series became one of the milestones in his career as an actor. In 2019, he made his movie debut with the movie, Intern-in-Chief.

The following year, he featured in the Thriller movie, Save Me. In the movie, he is portraying the lead character of Jason. Next, he will appear as Hopper in the movie, Patsy Lee & The Keepers of the 5 Kingdoms.

The actor is also a talented singer too. He came out as a singer with the album, Airplane Mode. The same year, he also launched the song, I Know.

As of now, he has managed to maintain his dignity as an actor. Till the date, he has not been through any sorts of controversy and rumors that created a buzz in the media.

However, the actress could not escape from the rumors. The rumors are in social media. Those rumors state that the actor is romantically linked with his fellow co-star, Indiana Massara (a.k.a Rooney of Chicken Girls). Despite the stories in social media, both of the actors have not made any statements official yet. The rumors probably started due to their friendship bond.

Matt Sato has brown eyes with brown hair. He stands at a height of 5 feet 10 inches and weighs around 65 kg. Also, the actor wears shoes of size 9.5 (US).

Talking about his appearance, he has innocent looks with an oval-shaped facial structure. The actor prefers to be clean-shaven.

You may also read the bio of Max Walker, Callan Potter, and Spencer Garrett.