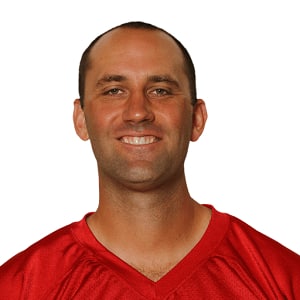 Complete the ball, moving the chains and being decisive with the football. My role is to help move the offense. To have a run game like we have, it takes a lot of pressure off.

I'm happy with the way I performed. I thought I came out and made some good decisions and gave us a chance.

What is the relationship of Matt Schaub?

Matt Schaub is a married man. He is married to Laurie Schaub. The pair married on February 23, 2008.

They have four children together: Makayla Schaub, Mackenzie Schaub, James Matthew, and Monroe Schaub. Their marriage is going strong as there is no news regarding any extramarital affairs at present.

Who is Matt Schaub?

Matt Schaub is an American football quarterback. Currently, he plays for the Atlanta Falcons of the National Football League (NFL). Previously, he played college football for the University of Virginia.

Additionally, he has also played for the Houston Texans, Baltimore Ravens, and Oakland Raiders.

Schaub was born Matthew Rutledge Schaub in Pittsburgh, Pennsylvania on June 25, 1981. He was born to parents Dale and Debbie Schaub.

In addition, he developed a keen interest in the world of football as a child. He is of German and American nationality. Furthermore, there are no details available about his ethnic background at present.

Talking about his education, Schaub attended West Chester East High School. Additionally, he was also enrolled at the University of Virginia.

Schaub was the Pro Bowl MVP in 2009. Additionally, he has been named the AFC Offensive Player of the Week four times.

Schaub was part of a controversy in 2012 after Ndamukong Suh kicked him in the groin during a game. The NFL later reviewed the kick. At present, there are no rumors concerning Schaub and his career.

Talking about his body measurement, Matt Schaub has a height of 1.96 m (6 ft 5 inches). Additionally, he weighs around 109kg. Furthermore, his hair color is dark brown and his eye color is light brown.

Is Matt Schaub still in the NFL?

What college did Matt Schaub go to?